When it comes to rugby, South Africa has had to accept second best when measured against New Zealand. In terms of sheer skills, however, South Africa has achieved clear-cut victories over their arch-rivals at the recent sheep-shearing world championships in Invercargill.

South Africa sent a team of six to the championships in Invercargill.

And when the dust, or rather fluff, had settled, South Africa had another two world championships in the shed.

Naturally this news makes for an extreme proud SA Sheep Shearing Federation as the federation continues their fine international form. The Golden Shears World Sheep Shearing and Wool Handling Championships were first held in England 40 years ago and are held every two to four years, with the venue alternating between northern and southern hemispheres.

Based on the average results in world championships, Tri-Nations Championships and world-record attempts, South Africa has shown the best returns in the blade-shearing category.

The South African team also had two machine-shearers and two wool handlers at the Invercargill event, but they weren’t able to make the cut past the elimination round, although still getting through a mound of work.

When it comes to actual competition, it’s very much all in a days’ work for the blade-shearers. They work five days a week, excepting when they’re on the road or weather conditions are unfavourable.

Their full-time profession actually serves as real-time practice for competition. They ‘train’ just as hard as they work.

A normal day’s work sees these men shearing between 100 and 120 sheep. And they pride themselves on being part of an elite group of athletes, especially given their respective ages. Shweni is 44 and Joel 50.

In a study showing just how fit these men are, the University of Western Australia conducted tests on Aussie machine shearer Dwayne Black during a world record attempt. During the nine-hours attempt he worked at 80-83% of maximum heart capacity. Similar tests done on the Wallaby rugby team found that for the 80 minutes of a rugby test, players were operating at around 75% of their heart capacity.  Shearers are undoubtedly superb athletes, as they do this for eight hours a day, every day.

Mayanzeke Shweni:
44-years-old
Works for Cape Mohair & Wool (CMW) as a sheep shearer.
Resides in Sterkspruit.
Shears an average of 100-120 sheep per day.

Bangani Joel:
50-years-old
Works for Brandfort Shearing Services as a sheep shearer.
Resides in Sterkspruit
Shears an average of 100 – 120 sheep per day. 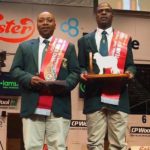 Sheer skill as SA duo clean up on world stage