Defending champion and 2012 Paralympian Lucas Sithole missed out on making the final of the US Open quads tennis final at Flushing Meadow, New York, at the weekend.
And fellow Paralympian Kgothatso ‘KG’ Montjane was knocked out in the quarter-finals of the women’s draw of the same competition.
Sithole lost his opportunity as a three way tie between the world top three saw it all coming down to the count; sets won vs sets lost, with Sithole narrowly missing the opportunity to successfully defend his title.
The triple amputee started his US Open defence in style, winning his first round robin match against world ranked No1 David Wagner (US) 7-5 2-6 6-3. He then faced the determined British No1 Andy Lapthorne in his second round robin match, but the Brit proved to be too steady, defeating him 2-6 3-6.
Then Sithole faced Nick Taylor (USA), currently ranked No6 in the world, in his last round robin match. It was a must-win for Sithole to possibly go through to the final and he duly won his third and last round robin match 7-5 6-3.
The result was that at the end of the round robin stage it was a three-way tie between the world’s top three, each losing one of their three matches with Lapthorne losing his last round robin match to Wagner (USA). It all came down to the count and the final was contested between Wagner and Lapthorne with the latter going on to record his first career grand slam quads singles title, winning 7-5 6-2.
Montjane, ranked No8 internationally, was defeated in the quarters by world No2 Aniek van Koot of the Netherlands 2-6 0-6.
Wheelchair Tennis SA Manager Karen Losch said: ‘It is an enormous achievement to participate in the US Open where only the top eight men and women and top four quads players compete and we are proud of both Lucas and KG on their effort and performance.  As the players now prepare for the world Masters, they know where to focus to ensure they grow both mentally and physically. Thank you to each and all for your support for these two inspirational sports stars.’ 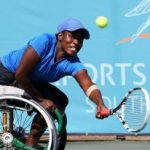 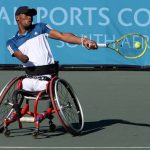 Sithole has his sights set on Open de France glory

By GARY LEMKE in Tokyo On the third day of staying in the Paralympic village bubble “it” finally dawned on me. “It” wasn’t the sheer visual aspect of the 4 000-plus Paralympians with disabilities all in the same environment of towering 17-storey apartments and surrounded by a 4km perimeter fence. Admittedly, that is the initial and most common conclusion of… END_OF_DOCUMENT_TOKEN_TO_BE_REPLACED