Paralympian wheelchair tennis star, Lucas Sithole is battling for a spot in the quads final of the Australian Open in Melbourne.
The world top four quad’s players are invited to compete for this prestigious title and trophy in a round robin format.
Defending champion and current world No1 David Wagner (US) opened his campaign with a win over South Africa’s 2013 US Open, winning champion 6-3 6-1.
World No22 Andrew Lapthorne (GBR) was beaten in his opening game by Australia’s third-ranked Dylan Alcott 6-4 6-4.
In the second round robin matches Lapthorne lost to Sithole. Ranked fourth in the world right now, Sithole beat Lapthorne 6-3 7-6 (4). Alcott has virtually secured his place in the final with his win over Wagner 6-4,6-4.
Both Sithole and Wagner have lost one match each in the round robin format. It now comes down to the wire for Wagner, Sithole and Lapthorne as Friday’s results will determine who advances to the finals.  After Thursday’s second-day action, the table standing are: Alcott two wins, Wagner one win, Sithole one win and Lapthorne no wins.
At the end of day three the top two players will advance to the finals. Sithole said: ‘I’m taking it one match at a time. I am focused, hungry to win and will give it my all.’
Thursoay also saw Sithole and Alcott take on Wagner and Lapthorne in the doubles finals. After a slow start, Sithole and Alcott won the second set to even the match at one set each. But the underdogs, Sithole and Alcott, could never quite get on top of the two experienced players, and lost a trying third set 0-6 6-3 6-2.
Karen Losch, Manager of Wheelchair Tennis South Africa says: ‘We will be rooting for you Lucas, you have the talent and skill, believe in yourself, give it all you have and enjoy the tournament.’ 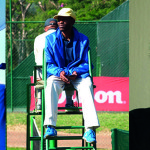 Kevin into next round

By GARY LEMKE in Tokyo On the third day of staying in the Paralympic village bubble “it” finally dawned on me. “It” wasn’t the sheer visual aspect of the 4 000-plus Paralympians with disabilities all in the same environment of towering 17-storey apartments and surrounded by a 4km perimeter fence. Admittedly, that is the initial and most common conclusion of… END_OF_DOCUMENT_TOKEN_TO_BE_REPLACED