South African squash player, Siyoli Lusaseni was part of a recent world delegation trying to get the sport included in the 2016 Olympics.

Lusaseni, who is part of the SA team for the World Games in Kaohsiung City, Taiwan later this month, and five other delegates represented the World Squash Federation (WSF) argueing squash’s case.

Seven sports are competing for two places for entry into the games and delegations had to make 30-minute presentations to state their case.
The seven sports are: squash, rugby sevens, golf, karate, rollersports, baseball and softball.

Lusaseni, a Western Province player says: “There was spontaneous applause after little Hanna spoke her part, and the wonderful response from the president at the end who said: ‘That was an excellent and clear presentation!”‘

Now the seven sports must wait until 13 August when they hear which two sports have been chosen. 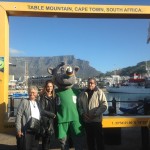 Chukuru makes his point a year out from Rio 2016

By GARY LEMKE in Tokyo On the third day of staying in the Paralympic village bubble “it” finally dawned on me. “It” wasn’t the sheer visual aspect of the 4 000-plus Paralympians with disabilities all in the same environment of towering 17-storey apartments and surrounded by a 4km perimeter fence. Admittedly, that is the initial and most common conclusion of… END_OF_DOCUMENT_TOKEN_TO_BE_REPLACED