Akani Simbine heads to Tokyo in the form of his life after blazing his way to a national and African record in the 100m in Hungary on Tuesday night.

Competing at the Gyulai Istvan Memorial World Athletics Continental Tour Gold meet, Simbine powered through in the final half of the race to stop the clock at 9.84 seconds, finishing well ahead of second-placed Michael Rodgers of the United States (10.00).

The 27-year-old took five hundredths off his previous personal best on the same track from 2016, and broke Olusoji Fasuba’s previous continental mark of 9.85 set in Qatar in 2006.

The men’s 400m final was set to be a possible preview of the Tokyo 2020 final, but defending Olympic champion and world record holder Wayde van Niekerk did not take to the start line.

Next in line for the South African star is Friday night’s Monaco Diamond League meeting. There he will settle into the starting blocks alongside the fastest man in the world so far in 2021‚ American Trayvon Bromell (9.77) and Ronnie Baker and Fred Kerley‚ with a 9.86 season’s best. 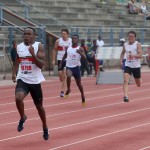 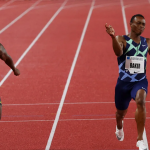 Another sub-10 as Simbine second in Monaco