It’s been an unforgettable season for South African rugby. The Boks recently finished their season as the Rugby Championship and World Cup champions. They will go into 2020 as the top-ranked side in the 15-man game.

Unfortunately, the Sevens men could not end their own season on a winning note. While they won the Dubai Sevens and progressed to the final of the Cape Town leg, they were outplayed by New Zealand in the decider.

New Zealand rattled South Africa in the early stages. The partisan crowd inspired the South Africans to repel wave after wave of New Zealand attack, and somehow the scoreline was 0-0 at the break.

Some sharp work by Seabelo Senatla created a try for Justin Geduld early in the second stanza. The Kiwis hit back, though, and a converted try saw the men in black leading with just a couple of minutes left to play.

The hosts conceded a penalty in the final minute. New Zealand kicked the ball to touch, won the resultant lineout, and then booted the ball into the stands.

Earlier, South Africa beat France 21-14 in the Cup semi-final on Sunday to qualify for the decider.

That came on the back of a quarter-final in which Ruhan Nel scored two tries as South Africa beat Kenya 17-5.

Kenya bossed the collisions for much of the contest. It was on the back of a brutal display around the ruck that they took an early 5-0 lead. The hosts hit back either side of half-time, though, to seize control. Ruhan Nel’s finishing was superb in both instances.

A further try in the second half sealed the result and brought the big crowd to its feet. 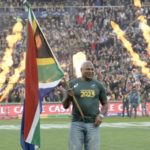 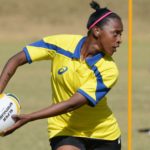 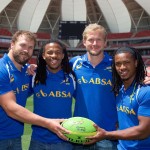