The South Africans looked in hungry mood as they put together a slick performance in their round of 16 clash against an Irish side that had earlier beaten Chile to set up a clash against the Blitzboks.

The match was the second last of the night and it was Siviwe ‘Shakes’ Soyizwapi who shone brightest as he crossed for four of the seven SA tries.

First try of the contest went to Justin Geduld who wriggled over after a quickly taken tap penalty by the livewire Selvyn Davids.

South Africa were winning most of the possession, with Ireland barely able to get their hands on the ball and Soyizwapi scored the first of his tries after latching onto a long, looping pass and beating two defenders before dotting down.

That was 3min 25sec out from halftime. Geduld then managed to intercept in a brief period of Irish possession and set Soyizwapi free for his second try to make it 19-0 at halftime as Davids was successful with a second conversion.

The second half saw the Blitzboks picking up from where they left off as they won possession from the Irish kick-off and the livewire Werner Kok scored after a barging run down the left-hand flank.

Just seconds later and the Blitzboks banged another nail into the Irish coffin as Geduld glided over to make it 33-0.

Davids, who was one of the Blitzboks’ most impressive players during his time on the field, was then substituted and Rosko Speckman took over the playmaking duties.

He set up Soyizwapi for his hat-trick try and it wasn’t long before another replacement, Zayn Davids, had made his mark by keeping the Irish defence busy and unleashed Soyizwapi for his fourth try of the night.

There was finally some luck for the Irish in the final play of the night as Terry Kennedy finally found a gap in the Blitzbok defence and trotted over under the posts to make the final score 45-7.

Coach Neil Powell’s Blitzboks will now take on Scotland in their quarter-final clash.

Should they beat the Scots they’ll progress to the semi-final against the winner of the match between hosts US and England. 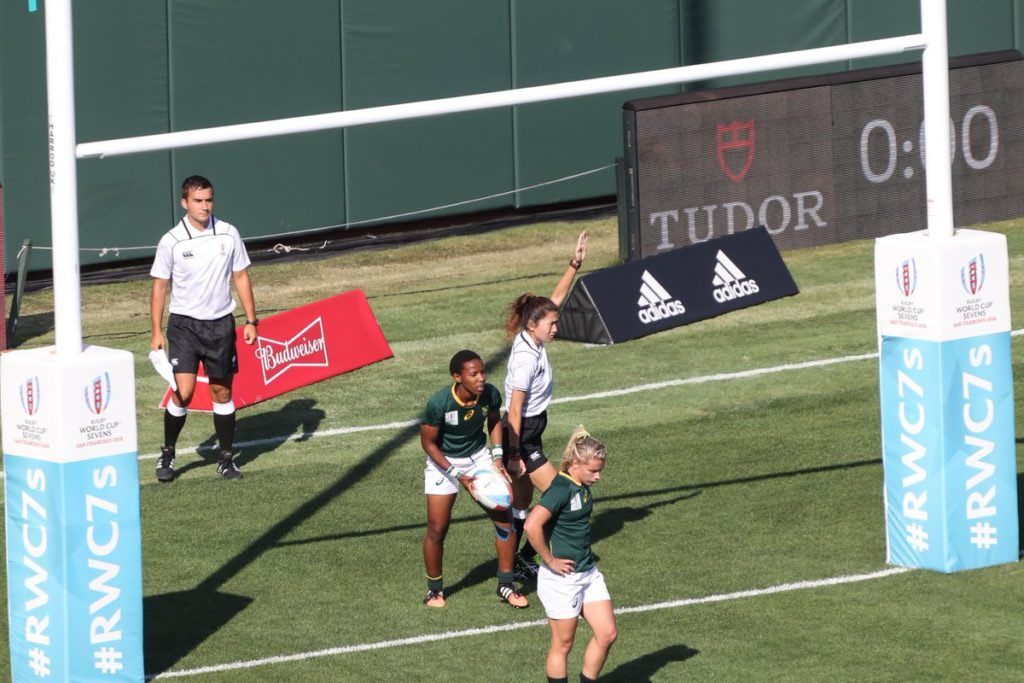 Meanwhile, Russia beat the Springbok women’s side 24-14 on Friday.

The result knocks South Africa out of the main tournament and they will now go into the Challenge competition, writes SA Rugby magazine’s MARIETTE ADAMS.

The Springbok women enjoyed the majority of possession early on, but despite punching holes in Russia’s defence, they were unable to convert pressure into points and it cost them in the end.

From turnover possession, Russia captain Alena Mikhaltsova shrugged off a defender to score against the run of play.

The Springbok women then conceded a yellow card for not retreating 10 metres and Russia made full use of their numerical advantage as Daria Shestakova and Daria Lushina scored to give them a healthy 19-point lead at the break.

Once South Africa were restored to their full complement, they started their comeback as converted tries by Zenay Jordaan and Babalwa Latsha reduced the deficit to five.

The Springbok women applied all the pressure as they recycled possession and went in search of a third score. However, a knock-on followed by a penalty handed possession back to Russia, who ran in a fourth try at the death to seal the victory.