Dartmouth ÔÇô Our sprint kayaking squad enjoyed a good opening day of competition at the World Championships in Canada Thursday, with all boats easing through their heats and qualifying for Friday’s semi-finals. Competition was fast and furious throughout the day as more than 1,000 athletes from 66 countries vie for the weekend’s podium steps.

Shaun Rubenstein started off the day forTeam SA, racing in the fifth and final heat of the men’s K1 1000m on Thursday morning. The Benoni ace finished in third place, two seconds off the pace of the heat winner, Gabor Kucsera of Hungary. The performance was good enough to see him qualify from the heats, and he has been drawn in the fourth semi-final for Friday.

Bridgitte Hartley placed second in a fast women’s K1 1000m heat, with her time of 4min 19.372sec making her the fourth quickest female of the day. She has been drawn in lane four of the second K1 1000m semi-final on Friday morning.

The young K2 coupling of Stu Waterworth and Cam Schoeman had a slightly tougher time in a difficult K2 1000m heat, but their eighth spot was enough to see them through to the next round. The other 1000m team boat, the men’s K4, put in one of their better times, and High-Performance co-ordinator Marcus Melck confirmed afterwards that ÔÇ£they were the best they have been.ÔÇØ With only two K4 1000m semi-finals taking place on Friday, they now have a good chance to make a final.

The afternoon’s 500m races brought more success for the team, as Len Jenkins put together a great charge to claim fourth place in his K1 heat. However the world-class talent on show will make his semi-final, packed with top Europeans, even more difficult to advance from.

Hartley had a tough K1 500m heat draw, but powered into the headwind to claim third place just two seconds behind German star Katrin Wagner-Augustin. She has a good draw for her semi-final on Friday afternoon though, so there is every chance the SA golden girl will be lining up on the A-Final start line come Sunday morning.

Wrapping up the day’s action for the team was the promising K2 pairing of Rubenstein and Mike Arthur. In a very tight heat, they managed a solid fourth placing, and will now have to finish strongly in the second K2 500m semi-final on Friday in an attempt to qualify for the A-Final on Sunday.

Team manageress Julia Thomas was proud of the team’s performance against the most powerful paddlers on the planet. ÔÇ£The competition is incredibly steep. It’s a huge jump up from the World Cups in Europe earlier this year, but we are feeling confident for the next stage tomorrow,ÔÇØ she said early on Friday.

The regatta was also abuzz with the news that the ICF has changed the Olympic sprint races, and included more women’s events for the London 2012 Olympic Games. The major change sees the men’s 500m races swapped to the shorter, more exciting 200m distance, with the men’s 1000m still regarded as the blue ribbon event. A 200m women’s race has also been included alongside the traditional women’s 500m.

The Sprint World Championships continue Friday on Dartmouth’s Lake Banook with the 1000m and 500m semi-finals, and finish on Sunday afternoon. 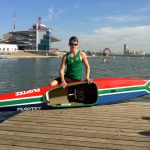 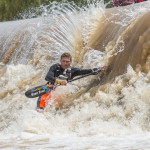 McGregor equals record and Solms seals win at the Fish

Tokyo looms, again, We don’t know for sure in what shape of form the Olympics and Paralympics will take place in July to September and if anything 2020 taught us to take nothing for granted. What we do know is that if Tokyo 2020 +1 does go ahead, it will do so against a new-found back drop where simply taking… END_OF_DOCUMENT_TOKEN_TO_BE_REPLACED