Sunday’s MTN Amashova Durban Classic (Pietermaritzburg to Durban) might just turn out to be one of the most exciting battles of the year for South Africa’s top sprinters.

For the last two years Malcolm Lange and Arran Brown (Medscheme) have dominated the sprint to the line, with Lange taking victory in 2008 and Brown finishing second. Last year the roles were reversed. Brown won and Lange was second.

But there is no guarantee that they will have it all their own way again this coming Sunday.┬áJudging by his performances during the past few weeks, Reinardt Janse van Rensburg (MTN-Energade) might just become Durban’s new King of Sprint on Sunday.

He has already bagged five major victories and he makes no secret about the fact that the Amashovashova is one of the races on which he has set his mind to win.

It is interesting to note that two years ago Janse van Rensburg, then just 19 years old, gave the first indication of things to come when he finished third in the sprint, just behind Lange and Brown, at the very same Amashovashova.

According to Brown he has great respect for Janse van Rensburg’s abilities as a sprinter. ÔÇ£I have never seen a rider as strong as Reinardt.┬á I have raced against Robert Hunter (stage winner in the Tour de France) and in my modest opinion, Robert was not as strong then as Reinardt is at the moment.

ÔÇ£Having said this, I still believe that Malcolm or I would be able to beat Reinardt in a straight sprint to the line, for the simple reason that the Amashovashova’s finish does not suite Reinardt’s style of riding. It is pancake flat and fast, which┬á means that a pure sprinter will always have an advantage.┬á Reinardt is more of a power sprinter who needs a slight drag to the line to be at his best.

ÔÇ£I have outsprinted Reinardt on the Tarlton racing track because it was flat and fast, but the moment there is slight bump going into the sprint it favours Reinardt.ÔÇØ

On the subject of how one should go about to win the Amashovashova, both Brown and Janse van Rensburg said that it is one of the most unpredictable races in the country.

ÔÇ£I think in 2008 we were a group of about five riders who managed to get away in a break and stay away, while last year the race finished in a bunch sprint,ÔÇØ Brown said.

Janse van Rensburg reckons that Fields Hill might be where the race would be won or lost. ÔÇ£If there should be a breakaway, that is where it will happen.ÔÇØ

Brown hopes that he and his teammates will be able to split up the race.

The big question is what Janse van Rensburg did to turn his cycling career around. In the beginning of the year he was just another rider. He will be the first to admit that his performances in Europe were sub-standard.┬á Now, all of a sudden, everybody keeps talking about what a strong rider he is. How did it happen?

ÔÇ£Much of the credit should go to Dr Carol Austin.┬á It is thanks to her that I have started to train properly.┬á I now train with much more intensity.
ÔÇ£I only wish that I was as strong as I am now in April when I was racing in Europe. Things might then have turned out quite differently. I might even have been role player in the races and not merely trying to survive.ÔÇØ

ÔÇ£MTN’s commitment to the Amashova and to cycling sponsorship as a whole is vital to the future of the sport. We understand that events such as the MTN Amashova Durban Classic, with its rich and colourful history spanning more than two decades, contribute significantly to the KZN province and to the future success of cycling events across the country,ÔÇØ says Bernard Pieters, senior sponsorship manager at MTN South Africa. 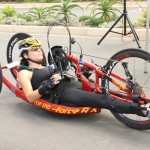 Another World Championships comes to Pietermaritzburg

Some statistics lie. These don’t…

By GARY LEMKE in Tokyo On the third day of staying in the Paralympic village bubble “it” finally dawned on me. “It” wasn’t the sheer visual aspect of the 4 000-plus Paralympians with disabilities all in the same environment of towering 17-storey apartments and surrounded by a 4km perimeter fence. Admittedly, that is the initial and most common conclusion of… END_OF_DOCUMENT_TOKEN_TO_BE_REPLACED