Our top mountain biker, Burry Stander, heads off to his last competitive race of the year on Tuesday.

The 2008 Beijing Olympian has already won medals at┬á two world championships events this year, and will be hoping his form will continue as his year winds down.

“It’s the Roc d’Azur festival in France,” said Stander. “It’s a super cool race right on the beach, what more could I ask for?

“Another highlight is the BMX Supercross race that takes place there as well. According to Sifiso Nhlapo’s Twitter it’s going to be the biggest supercross race ever and I’ll be in the stands cheering him on for sure.”

Stander has recently spent some time at home in Port Shepstone, KwaZulu-Natal and said on his internet blog. “Man its been a long time since I’ve been home and had absolutely nothing to do! I was however carrying some flu for most of this week which was a bit of a bummer. Nevertheless I got to do all my favourite things, I drank huge loads of coffee, hung out with friends, hit the beach, ran and even did some solid rides.

“The coolest of these rides was on Sunday. It was a pretty cool overcast day with minimal wind which made it perfect for some hard trail riding. I decided to ride the old Hibiscus Classic route which first took place in 1998 if I remember correctly. I was about 10 years old and it was our little club’s first attempt at putting on a race. On the morning of the inaugural event the rain came bucketing down and we figured it best to just cancel. Little did we know that real mountainbikers don’t cancel just because of a little rain and the riders showed up in numbers at my parents’ farm. We had no choice but to forge ahead with myself and my brother competing in the race as well. It wasnt the norm for me to ride in wet conditions yet so I was suited to the max and even sported some tracksuit pants!

“Riding the route again after so many years ended up being such a cool experience and took me back to the days when the going in my opinion was really hard! I couldn’t think that a 10-year-old could and would want to ride up and down some of those hills. The infamous ‘firebreak’ section which was basically like a two wheeled version of Russian roulette is now a sweet singletrack paradise due to some major quad bike excavating. I had loads of fun exploring those valleys and can’t wait to spend more time out there in the summer!” 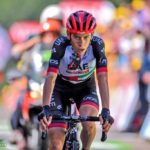 Meintjes moves up as Tour de France hits the hills

Tokyo looms, again, We don’t know for sure in what shape of form the Olympics and Paralympics will take place in July to September and if anything 2020 taught us to take nothing for granted. What we do know is that if Tokyo 2020 +1 does go ahead, it will do so against a new-found back drop where simply taking… END_OF_DOCUMENT_TOKEN_TO_BE_REPLACED