South Africa’s top marathon racers got the 2012 ABSA Cape Epic off to a blazing start when they dominated the top positions in the 27-kilometre prologue time trial that heralded the start of the international eight-day mountain bike stage race in Durbanville on Sunday.

Defending champions Burry Stander (RSA) and Christoph Sauser (SUI) of the 36One-Songo-Specialized team sped around the short, hilly course in a time of one hour, 11 minutes and 52 seconds to claim a narrow 13-second victory over the all-South African Nedbank 360Life pair of Kevin Evans and David George.

Four South Africans in the top four overall after the opening day is a promising start for the host nation. The world’s most prestigious mountain bike stage race, which saw 600 teams of two set off on the opening stage in warm, dry conditions at Meerendal Wine Estate on Sunday, has been dominated by foreigners over the past eight years. Last year Stander interrupted that pattern when he claimed the first South African victory along with Sauser, who first won it in 2006.

Stander and Sauser were the favourites going into Sunday’s prologue partly as a result of recent good form and partly because they’re both former World Champions in the Olympic Cross-country discipline, which requires speed, skill and intensity over short duration.

Evans and George, bidding for a third time as teammates to become the first ever South African team to win the coveted title, have also shown good form in the build-up races, but are marathon specialists, surprising many by finishing so close to Stander and Sauser on a short, technical course.

Knox, another of South Africa’s leading marathon racers, was paired with Yamamoto, the Asian Olympic cross-country champion just last week, after his original American partner, Todd Wells, was forced to withdraw due to injury.

ÔÇ£We were hoping to get more time in the prologue like we’ve done in previous years, but Nedbank 360Life have upped their game for sure. We went has hard as we could. I took a small tumble and Christoph almost crashed, but after that we tried to relax and it seemed to help,ÔÇØ said Stander.

ÔÇ£The prologue is only a very small part of the race, but it was important for us to win it. It sets a good tone. The win today didn’t come as easy as before. But the other teams are going to have to show they want to take the lead tomorrow. We’ll be very vigilant of course. We’re prepared for a hard week of racing.

Stander was full or praise for the support and stage setting, finishing on top of Dorst Berg, the race’s first ever mountaintop finish.

ÔÇ£The crowds were just awesome. So much support out there today, especially on the last climb. It’s good for us and our Songo.info charity. Having a mountaintop finish was quite special.ÔÇØ

Other South Africans that shone on day one were Robert Sim, who along with German partner Nico Pfitzenmaier of Team Robert Daniel Momsen, claimed the stage victory in the Telkom Masters (over 40 years) category in a time of 1:23.00. Runners-up were the all South African JAG Craft team of Adrian Enthoven and Delaney Impey.

In the women’s category, South African Theresa Ralph and her Norweigan partner, Nina Gassler (Britehouse Biogen) finished in a strong second place behind the Wheels4Life pair of Esther Suss (SUI) and Sally Bigham (GBR); while in the Mixed division, the Contego 28E husband-and-wife team of Erik and Ariane Kleinhans finished second to the German/Swiss pair of Udo Boelts and Milena Landtwing. Another South African, Russell de Jager and his Swiss partner Andrea Huser (Big Tree Velocity Sports Lab) were third in the Mixed category.

On Monday’s Stage 1, Stander and Sauser will wear the overall leader’s Yellow Zebra Jerseys, while Evans and George will don the red jerseys denoting the leading African Team. In true Cape Epic tradition, it’s a menacing first stage, starting and finishing in Robertson and taking the riders over a distance of 115km with 2350 metres of vertical ascent. The ascents are steep and some of them rocky, classic Cape Epic terrain that’s sure to break the rhythm of even the top teams. 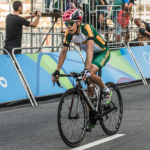 Hunter back in action

Tokyo looms, again, We don’t know for sure in what shape of form the Olympics and Paralympics will take place in July to September and if anything 2020 taught us to take nothing for granted. What we do know is that if Tokyo 2020 +1 does go ahead, it will do so against a new-found back drop where simply taking… END_OF_DOCUMENT_TOKEN_TO_BE_REPLACED