The Fairbairn Capital/Old Mutual joBerg2c is fast becoming a two-horse race after another dominant performance by Waylon Woolcock and Neil MacDonald of Team RE:CM and Brandon Stewart and Darren Lill of FedGroup Berg and Bush on Wednesday.

Woolcock and MacDonald once again got the better of Stewart and Lill in the sprint to register a time of 3hr 38min for the undulating 93-kilometre journey between Kamberg and Hazeldene farm in the vicinity of Underberg in the Southern Drakensberg.

David Morison and Stuart Marais of Blend Properties captured their second podium in as many days by crossing the line in a competitive 3:44:23.

The pair however managed to hang on to fourth with a time of 3:53:09, holding off the chasing Shaun Peschl and Brett Dickson of Marshall World of Sport, who completed the stage in 3:54:15.

ÔÇ£Although we’ve won today, they seemed very comfortable,ÔÇØ said a tired but happy MacDonald. ÔÇ£We attacked as much as possible over the last 10 kilometres, but didn’t make much impact.

ÔÇ£We really thought today was going to be the day with all the climbing, but I think the previous stages have taken their toll on everyone. After 700 kilometres of racing the mind is willing, but the body not so eager.ÔÇØ

Team RE:CM took the early initiative and applied pressure on the seven-kilometre Vergelegen ascent heading towards the first waterpoint, but to no avail.

On the technical climb after the day’s big river crossing around the 50-kilometre mark, it was Stewart and Lill who were able to establish a 20-second lead, but all came together as soon as they hit the district roads.

ÔÇ£The distances between the technical sections and district roads were too big to make it count,ÔÇØ said Stewart. ÔÇ£That climb was the last real opportunity.ÔÇØ

MacDonald said Stewart had been climbing strongly. ÔÇ£I marked him, while Waylon did the same with Darren. So it was all pretty much neutralised.ÔÇØ

ÔÇ£Although we don’t have the lead, we can’t ask for anything more. It’s been great for our sponsors.ÔÇØ

According to MacDonald, they were gaining in confidence as the days passed and felt they were still in with a chance.

His team-mate said the race was now becoming a balancing act.

ÔÇ£Although we must attack, it’s all about pacing yourself over nine days. We can’t afford to make stupid mistakes.ÔÇØ

The race finishes on the beach in Scottburgh on Saturday.

Louw and Knipe on top 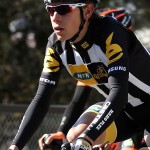 Meintjes makes it a debut European victory in Italy

Tokyo looms, again, We don’t know for sure in what shape of form the Olympics and Paralympics will take place in July to September and if anything 2020 taught us to take nothing for granted. What we do know is that if Tokyo 2020 +1 does go ahead, it will do so against a new-found back drop where simply taking… END_OF_DOCUMENT_TOKEN_TO_BE_REPLACED