There’s no doubting that in triathlon circles Andrea Steyn is a model of consistency.

It didn’t stop on December 31 though. This year has started off with her winning the 11 Global Triathlon in Cape Town in February and then first of the 2010 Momentum Health IFlex National Duathlon races.

Small wonder then that Andrea is considered the favourite to defend her national title at Germiston Lake on Sunday.

Like the men’s race, which has both elite and Under-23 racing together, so the elite women will be racing alongside the Under-23 women which will result in a race within a race and should provide some entertaining racing.

As this is a non-drafting race and Andrea, by her own admission, is not the best of swimmers the race will probably come down to a chase by the defending champion. It is likely that Caroline Koll, SA Long Distance champion, will be out of the water ahead of Steyn, possibly even Kathryn Cronje.

Steyn will have to play catch up on the bike, and with no-one around her on whose wheel she could sit (and take turns with that competitor) it is going to be a hard grind to close the gap. Andrea’s running right now though is very strong and she clearly has more speed than her opponents.

This is where it gets interesting. There are some really talented Under-23’s racing in the same race. And both Lauren Dance and Vicky Van Der Merwe are strong swimmers. Van der Merwe is also very strong on the bike and could well open a huge lead on Steyn. Van der Merwe’s Achilles heel is her run. She has not done a road session in three weeks, suffering from a gluteus soleus injury and has been doing her run training in the pool.

So the thinking money is still on Steyn to come from behind.

The race is made up of two laps of 750m in Germiston Lake for the swim, before heading off on a four lap out and back 40-kilometre cycle leg with the final 10km run also being four laps. The route is designed in such a way as the make it very spectator friendly. The women and Under-23 women start at 8am on Sunday.

Staying with the under-23 title race and the men’s event promises to be oh so tight.

Between Richard Murray, Wikus Weber (defending champion) and Theo Blignaut it’s difficult to pick a favourite. Weber says he is fit and ready to defend his title, but Murray has come a long way in the last 12 months. His swim may not be the best, so Murray will be playing catch-up when he comes out of the water. But then having seen how he raced through the field at the Troisport JHB Tri Series race in early March, it is certainly not beyond Murray’s ability to chase down Weber.

The irony is, that they both race for the same team, the BSG Team, but there will be no team tactics come. The race being non-draft legal will make for very difficult team tactics. Former SA champion Hendrik De Villiers believes that the cycle leg is key. And both Murray and Weber are formidable cyclists. The lead out of the water by Weber could prove to be crucial. 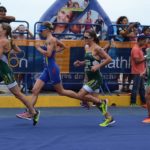 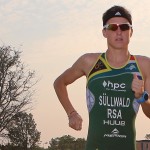 Sullwald struck down by injury again and misses Abu Dhabi

Tokyo looms, again, We don’t know for sure in what shape of form the Olympics and Paralympics will take place in July to September and if anything 2020 taught us to take nothing for granted. What we do know is that if Tokyo 2020 +1 does go ahead, it will do so against a new-found back drop where simply taking… END_OF_DOCUMENT_TOKEN_TO_BE_REPLACED