Ockie Strydom replaced Danie van Tonder at the top of the all-time career wins list on the IGT Tour when he pushed his trophy haul on the country’s premier development Tour to 11 victories in the Waterkloof Challenge on Wednesday.
The Kempton Park golfer claimed his third consecutive title in the Centurion Championship last week to match Van Tonder’s 10-title feat and set the new record in an outstanding wire-to-wire performance at Waterkloof Golf Club.
Strydom produced three successive rounds of 66 to celebrate an emphatic eight-stroke victory on 18-under-par 198.
The expected challenge from Christiaan Bezuidenhout fizzled out when the three-time IGT Tour champion dropped three shots in four holes around the turn and the Delmas pro had to settle for second on 206 after returning a disappointing 71.
Englishman Gregg Blainy closed with a 72 to take third on six under, finishing a shot ahead of Carrie Park (74) and Morne Buys (71).
Strydom said his bid to make it four-in-a-row kicked into high gear after he eagled the par five second. ‘That eagle definitely gave me the winning momentum,’ he said. ‘I hit my tee shot just off the fairway on the right and I had 235 metres left to the pin. I had the wind in my back, so I striped a four-iron but I hit it in the left greenside bunker.
‘I had a good look at the pin and the line from the bunker and hit a perfect trap-shot that caught the downslope and rolled straight into the hole. This put me five shots clear and that’s a nice cushion to own so early in the round.’
Strydom knocked in birdie putts at four and 10 to stay well clear of the field, but dropped a shot at 11 when he got a little over-zealous with his putter.
‘I hit the birdie putt too hard and it raced past the hole and then I missed the return,’ he explained. ‘I still had a six-shot lead, so it didn’t upset my rhythm. Made a solid two-putt birdie at 14 and then I spotted my wife Marizanne. She popped in and surprised me midway through the round and that really put a bounce in my step. She’s my greatest fan and I couldn’t do this job without her support.
‘I hit a great lob-wedge from 65 metres out close at 16 to set up another birdie at 16 and the last birdie at 18 was a nice way to finish out the round.’
Strydom hit his purple patch with a play-off victory in the Killarney Challenge at the start of June. With four trophies on the mantle the Sunshine Tour campaigner doesn’t plan to slow down.
‘We still have two weeks of the winter break left until the Sunshine Tour starts up again, so I’m going to play next week,’ said the GFG Academy player. ‘If a fifth win is on the cards, I’ll go for it.’
‘The first six months were frustrating. I came close a few times, but I just couldn’t pull it through and sometimes the monkey on my back feels like a gorilla. I know it’s because I pushed too hard, so my coach (Graeme Francis) and I have been focusing on processes over the last five weeks. These have been paying off nicely on the IGT Tour and I’ve developed some good habits that I can take back to the Sunshine Tour.’
The next event is the Zwartkop Challenge from 19-21 July at Zwartkop Country Club.

Picture of Strydom with his trophy, courtesy of CJ du Plooy 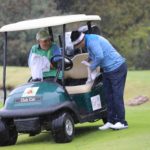 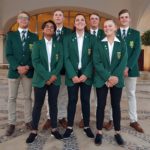 SA juniors are heading for World Cup in Japan 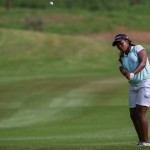 Myeki set to make history for SA in Tunisia

By GARY LEMKE in Tokyo On the third day of staying in the Paralympic village bubble “it” finally dawned on me. “It” wasn’t the sheer visual aspect of the 4 000-plus Paralympians with disabilities all in the same environment of towering 17-storey apartments and surrounded by a 4km perimeter fence. Admittedly, that is the initial and most common conclusion of… END_OF_DOCUMENT_TOKEN_TO_BE_REPLACED