Former world surfing champion Shaun Tomson hosts the Golden Jubilee celebrations for the historic 50th edition of the Ballito Pro presented by Billabong which will be run at Willard Beach in KwaDukuza from 25 June to 1 July.

Tomson has played a huge role in the history of the world’s longest running professional surfing event. His late father Ernie was instrumental in creating the Durban 500 back in 1969 and Tomson won the Gunston 500 for six consecutive years from 1973 to 1978, a record that is unlikely to be surpassed at this or any other major international surfing contest.

The former Durbanite, now an internationally acclaimed motivational speaker, author and film-maker who resides in California, will spend more than a month in KwaDukuza conducting a Positive Wave Tour comprising motivational workshops with business, council and various high schools leading up to and continuing after the festival.

The tour will culminate with 67 minutes of work at a selected high school to celebrate the centenary of Nelson Mandela’s birthday on 18 July.

He will also host a screening of Bustin Down The Door at the Ballito Junction Regional Mall, the venue for the Ballito Pro Food and Wine Festival. Produced by Tomson in 2008, the film chronicles the often turbulent birth of professional surfing during the mid-1970’s that led to his crowning as the second pro world surfing champion in 1977

Tomson will be honoured at a glittering awards function on  27 June at Coco Der Mer in Ballito alongside the other South African winners of the event. They include two-time and defending champion Jordy Smith (2010 & 2017), Ricky Basnett (2006) and Gavin Rudolph, winner of the inaugural edition in 1969.

This year’s edition of the Ballito Pro Surf Festival also celebrates the 10th anniversary since it relocated from Durban to KwaDukuza and the 21st year of the Billabong Junior Series presented by BOS which has played a pivotal role in grooming young South African surfers for future competitive success.

Alongside the surfing, visitors will be spoiled for choice with non-stop activities providing even more entertainment throughout the Ballito festival site. South Africa’s hottest musical acts appealing to all tastes – rock, pop, hip hop, kwaito, electro and dance – will be performing live on Salt Rock Beach over the last weekend. Beach and extreme sports, culinary contests as well as quality retail and food stalls will captivate visitors at this coastal holiday highlight.

Photo: Tomson in his hey days, surfing in Hawaii 40 years ago, by Larry Pierce 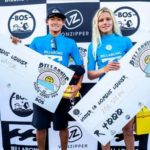 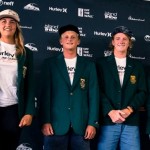 Young stars of the waves crowned in Eastern Cape