Team SA’s swimmers immediately got among the medals on their first day of competition at the Region V Games in Gaborone, Botswana, winning four golds and three silvers. This took Team SA’s tally to 21 (eight golds, 11 silvers and two bronzes).

The rain that came down late in the day and led to a major storm hampered the programmes around the various venues. The swimming at the University of Botswana Swimming Pool was also stopped and will be resumed on Sunday.

Dune Coetzee, the 2018 Youth Olympic Games silver medallist and flag bearer for the Region V Games, was the first swimmer to set the pace for Team SA as she took gold in the women’s 200m freestyle. In the same race, her teammate Christin Mundell won a silver medal.

Louw Oberholzer followed in the next race, the men’s 100m freestyle, and also won a gold medal, while the silver medal in the same event went to Matthew Bosch.

Inge Weidemann won the 50m butterfly and was chased home by Olivia Nel, who won silver.

Gold medallist in the 2018 Youth Olympic Games Michael Houlie raced to a gold medal in the 50m breaststroke, while teammate Matthew Sates placed fourth in the same race.

The football girls kick-started their competition with a match against Swaziland on Saturday, but the storm interrupted them on the 32nd minute. Though the scoreline was at 0‐0, Team SA was dominating the match. The game will resume from where they left off and move to a new venue.

Basketball teams on Saturday added two silver medals to the tally, one from the girls’ team and another from the boys as they displayed top form in their three-on-three matches against their opponents.

The second round saw the SA women battling it out against Botswana. They won 16‐5, but lost to Angola 18-9.

Both teams entered the finals and finished second behind Angola, who won both matches.

Commenting on the women’s performance, the coach, Thesline Davids, said, ‘Overall the girls did very well. It was great basketball, the girls had good exposure and could learn good lessons from this experience.

‘Our main focus was not three-on-three, but the qualifications which start tomorrow (Sunday). We could also see what our opponents look like and it should be an interesting competition going on from here.’

The men’s team head coach, Lethuxolo Zulu, said: ‘The three-on-three has been a long tournament. The boys are not used to playing the format so it was a new thing for them, but they have learnt a lot from this big tournament. I am sure by tomorrow we will be much better than the team that just won the tournament.’

Judo wrapped up their competition at this year’s Region V Games with the highest number of medals among the other countries, a total of 12 medals – four gold, six silver and two bronze.

On Saturday the TeamSA judo team lost to Botswana in the bronze medal finals. Manager and coach for the Judo team, Sondisa Magajana, said: ‘Overall, the team was well prepared and displayed excellent performances, however, for the team events South Africa didn’t have a full team due to injuries, so it compromised us against Botswana and Angola. From Monday we will be attending a training camp at the University of Botswana Indoor Sports Centre in preparation for our national trials and national ranking events, which are the qualifiers for the African Championships that will be held in Cape Town in April 2019,’ added Magajana.

In netball action, it was the Dumisani Chauke-coached South Africans who beat Zimbabwe 48‐40 in their preliminary match.

They will now take on hosts Botswana on Sunday.

Elsewhere, it was a day of intense competition as tennis players continued with their preliminary matches.

Thando Longwe‐Smit and Robbie Arends, competing in the doubles, won their match 6‐0 6‐2 to reach the semi-finals.

Robbie Arends and Ntokozo Zungu also played doubles against Lesotho and won to proceed to the semi-finals as well, while Delien Kleinhans reached Monday’s finals. 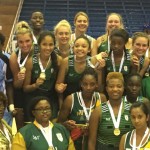 Netballers shoot their way to Region 5 gold in Angola

Swimmers up tally to 25

By GARY LEMKE in Tokyo On the third day of staying in the Paralympic village bubble “it” finally dawned on me. “It” wasn’t the sheer visual aspect of the 4 000-plus Paralympians with disabilities all in the same environment of towering 17-storey apartments and surrounded by a 4km perimeter fence. Admittedly, that is the initial and most common conclusion of… END_OF_DOCUMENT_TOKEN_TO_BE_REPLACED