On Sunday night the world saw the ruthless competitive nature of Cameron van der Burgh, a swimmer who tore up the record books and then lay on the lane rope and celebrated. On Monday at a packed media conference, we saw another side.

It is one which will further endear him to the nation and ensure he is celebrated as a superstar for all his years to come. Van der Burgh even choked up when he explained how it felt to receive the gold medal. ‘I’ve still got goosebumps when I think about it. I will remember all the love, the friendships and the support for the rest of my life. The role that each one has played connected the dots towards this,’ he said as he pointed to the shiny Olympic gold medal. ‘The gold is just an object, but it’s about all the emotions that have gone into getting this,’ he said, as that emotion started to get to him.

‘But this won’t change me as a person, who I am. I’m humbled by all this and I know that while my life has changed, I haven’t.’

Van der Burgh had arrived by underground tube at Team SA’s headquarters and while he might still be relatively anonymous in this bustling and crowded capital city, amongst South Africans he is A-list celebrity.

At the media conference he was generous with his time, staying to pose for photos of whomever wanted to be snapped with South Africa’s latest sporting hero. However, he paid tribute to those who have helped him on the journey that has culminated in this gold. ‘Fourteen years came down to 58.4 seconds. I was thinking maybe it would be a 58.7 but it all came together. It was the perfect swim. South Africa has always had an Olympic culture. Hopefully I can inspire youngsters back home to take the sport of swimming seriously. They say it takes eight years for a new generation to come through so hopefully by 2020 there will be champions out there who were inspired by me. Just like I was by Ryk Neethling in the 2004 Olympics in Athens. And my childhood hero, Penny Heyns, has just joined Twitter and she contacted me. That was also very special.’

Apart from the not-insignificant matter of R400,000 due to Van der Burgh as a Sascoc pre-Games incentive for gold medallists, the breaststroker who touched the pad in a mind-blowing 58.46 seconds, which provided a catalyst for that ‘cool’ celebration of lying on the lane rope, it’s likely that he’s going to have to employ someone to start counting his cash as the endorsements start rolling in.

‘Ryk says this feeling of being an Olympic gold medallist never wears off. And when I woke up this morning and looked at the gold medal it was like having a new kid. It’s with me for the rest of my life and I’ve got to treasure it and respect it. For an athlete it’s the pinnacle. For us athletes, winning an Olympic gold is like being given a knighthood. It’s like being called Sir. It’s truly humbling and I feel very blessed.’

Van der Burgh also predicted big things for teammate Chad le Clos. ‘Everyone in life gets dealt cards. He’s got some tremendous ones lying on the table. He’s more versatile than me and he’s improving so much. What I have achieved is special but Chad has the capability to really shine at the 2016 Olympics.’

The new Olympic champion … let’s say that one more time … the new Olympic champion also paid tribute to those who’ve been with him along the 14-year journey. ‘I’ve ticked all the boxes, world records, world championships, Commonwealth Games and now I’ve got the Olympics. But I couldn’t have done it without other people in my life, my family and friends, and people like my coach Dirk Lange, Ryk and my psychologist.

‘Dirk mentored me yesterday and kept me calm. I was also constantly reminded of a quote from my psychologist which goes, ÔÇ£as if all my life has been about preparing for this one momentÔÇØ. I took that into the race and concentrated on the race. I knew I’d got to the turn fast ÔÇô as we’d planned. From there, for the final 50 metres, the thought was ‘give it all those last four years of hard work. The pain was excruciating but I wasn’t going to give in. I concentrated on maintaining my stroke, keeping going strongly to the end,’ he said of the race itself.

Van der Burgh also showed another, more jocular side, on returning to the village late on Sunday night, having been seen by anti-doping and appearing at an international media conference.

‘I had the gold medal around me and played a trick, zipping up my tracksuit as I went through security at the athletes village. The scanner went off and then I unzipped and showed them the medal. It provided them with some light relief after a long day. And then I spent the night with friends and family ÔÇô and I could see that some were pretty intoxicated!’

Not as intoxicated as a nation of 50 million people back in South Africa who are still feeding on the feelgood factor by a genuine superstar who has made the country proud and banished the ghosts of Beijing 2008. 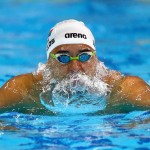 Stoychev on top in PE

Tokyo looms, again, We don’t know for sure in what shape of form the Olympics and Paralympics will take place in July to September and if anything 2020 taught us to take nothing for granted. What we do know is that if Tokyo 2020 +1 does go ahead, it will do so against a new-found back drop where simply taking… END_OF_DOCUMENT_TOKEN_TO_BE_REPLACED