Looking at her tiny baby born prematurely at 28 weeks and weighing in at less than a kilogram, Odessa Swarts feared the worst.

She was still only 18 when she arrived at the state-funded Tygerberg Hospital in Cape Town on 15 July 1992. She was told to prepare herself as doctors gave her new-born a blood transfusion and with a medical prediction of less than 24 hours to live.

Today Odessa, a star athlete in her own right during South Africa’s apartheid years, is the proudest mother in the world, and her 24 year-old son is the biggest property in athletics. Period. And on Monday, the day after he had done the unimaginable and won Olympic gold from the extreme outside lane eight, and not only won, but broken the great Michael Johnson’s world record that had stood since 1999, Van Niekerk was still trying to take everything in.

‘I actually had no strategy, I just let God just take over,’ he said reflecting on that 43.03sec effort which carved a huge 0.15 seconds off the record the experts said could only be broken by Usain Bolt. Van Niekerk had come to Rio as the world champion from last year and carried huge gold medal hopes for Team South Africa. After a semi-final that saw him placed in lane eight, well away from the likes of Kirani James and LaShawn Merritt, the whispers grew. He can win gold, was the feeling, but everything would have to go right for him. Consensus was that, from lane eight, he’d have to go like a bullet leaving a barrel and hope to hang on.

Van Niekerk admitted that he had encountered ‘a difficult championship here in Rio. Through the heats and the semi-final, I had a back niggle that required treatment. And when I got to the starting blocks for the final I felt so emotional. But I believe that God’s will will be done in my life. I felt no pain. That last 100m was a miracle. When I looked back at the race, and seeing the last 100, I thought, “wow, is that me?” It was such a quality line-up.

‘I have watched the race, and am surprised how strong I finished, I didn’t feel as strong as it looked, and actually I’m quite impressed with last 100! I give coach [Anna ‘Tannie Ans’ Botha], full credit for sharpening me up for that last 100, believing in me and trusting my ability. She has so much experience and she’s been on the athletics scene for years. It was easy for me to trust in her. I’ve had three, four years with this coach, our achievements as a team have spoken for themselves. You don’t change a winning team. I definitely expect way more achievements with her. We’ve both got so much more to learn.’

And what did Van Niekerk think of that moment with Bolt, when the great man interrupted a TV interview after winning an unprecedented third 100m Olympic gold in succession to run down the stairs and embrace the South African? ‘We’ve built a good relationship over the last few months, what he [Bolt] has achieved speaks for itself. It was a special moment; he’s played a huge role in motivating me and giving me self belief.’

That’s one of the beauties of Van Niekerk. The man is being widely tipped to take over the mantle as the poster for sprinting and Olympic victory – and the manner in which he did it to break the world record, has upped his commercial worth to a different planet. He is a brand that is going to be huge over the next few years, and there is no one capable of going with him over 400m. The humble, God-fearing young man is a sprinting goldmine.

And, in his humble way, the South African would like to follow in the giant footsteps of the Jamaican. He already has created history by running under 10 seconds for the 100m, under 20 for the 200m and now he holds the 400m world record at 43.03. ‘His times speak for themselves but I look forward to racing him in the 200 and going on to achieve what he has achieved.’ On another day one could create a bombshell headline that ‘Van Niekerk wants to take on Bolt and beat him,’ but that’s not the way he said it.

Away from the all-seeing glare of the cameras, Van Niekerk is still as humble as he ever was. He is learning to ‘say no’ to unreasonable requests on his time, but it hasn’t been easy. ‘I’m a placid person. Everyone else in my family does all the talking and that’s what happened after the race. I literally sat back on the couch while they talked about all the crazy stories they’ve come across in Rio.’

Earlier at these Games, given that he’s had treatment for those ‘niggles’ that he spoke about, Van Niekerk wrote a note to the physios working on him and they stuck it on the wall. It says, ‘Pray First. Love others & Be kind. God bless Wayde van Niekerk 100m 9. 200m 19. 400m 43.

He also took to Twitter to speak of bumping into Sonny Bill Williams after the New Zealand rugby player tagged him, saying, ‘Meet the 400m world champ today, suck a humble due, good luck’, to reply, ‘What a humbling moment meeting you … blessing.’ Later he said, of Sonny Bill, ‘Just met this legend … was a bit star struck … meeting this beast.’

Little known is that Van Niekerk was not always a sprinting superstar in the making. At the South African Under-18 championships, he won the silver medal with a height of 2.00m. When it was pointed out to him on Twitter he replied, ‘Lol a throwback’.

The stories go on and on, but the narrative is clear. This global superstar is destined for material riches far beyond anyone’s wildest dreams. Then again, Van Niekerk’s richest and greatness is gathered from those closest to him and those material things come second, no matter how many open cheques with the 0000s added on at the end. He really is a one in 10-million type of guy.

So I did some Olympic match thing while chilling. Didn’t find me but this guys my match @DannyRakeTalbot ? lol pic.twitter.com/8mCy3wfw6Z

.@WaydeDreamer ‘s words of encouragement against the wall in the physio room at the athletes’ village. #IOLYMPICS pic.twitter.com/DorJTX5AeV

@WaydeDreamer Simonsberg Primary Kraaifontein is proud of you.

What a humbling moment meeting you… blessings https://t.co/Q37LdoGw0z 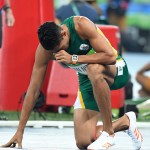 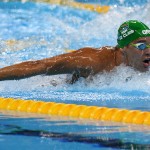 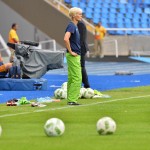