Starting and finishing at Retreat (Boschendal Wine Estate) the third and final stage pitted runners against a 20-22km route.

‘We knew all along that we would not be able to secure a stage three win as the route is too flat,’ says Calitz. ‘Bernie is fast enough on the flats, but I’m not. We looked at the profile of each stage beforehand.

‘We knew what our strengths were and knew what to expect. We managed to build a good gap after the first two stages. It wasn’t easy, but everything went according to plan. Bernie and I have raced AfricanX together three times and we’ve won all three. We’re happy with that.’

According to Rukadza, AfricanX is a great race: ‘We didn’t plan to win the first stage. Stage two was always our main focus. We were happy to win both stages though. Today we just wanted to protect our lead. AfricanX is a really nice race. I enjoy being here. Teaming up with AJ is awesome. He’s really supportive. We definitely want to come back next year.’ 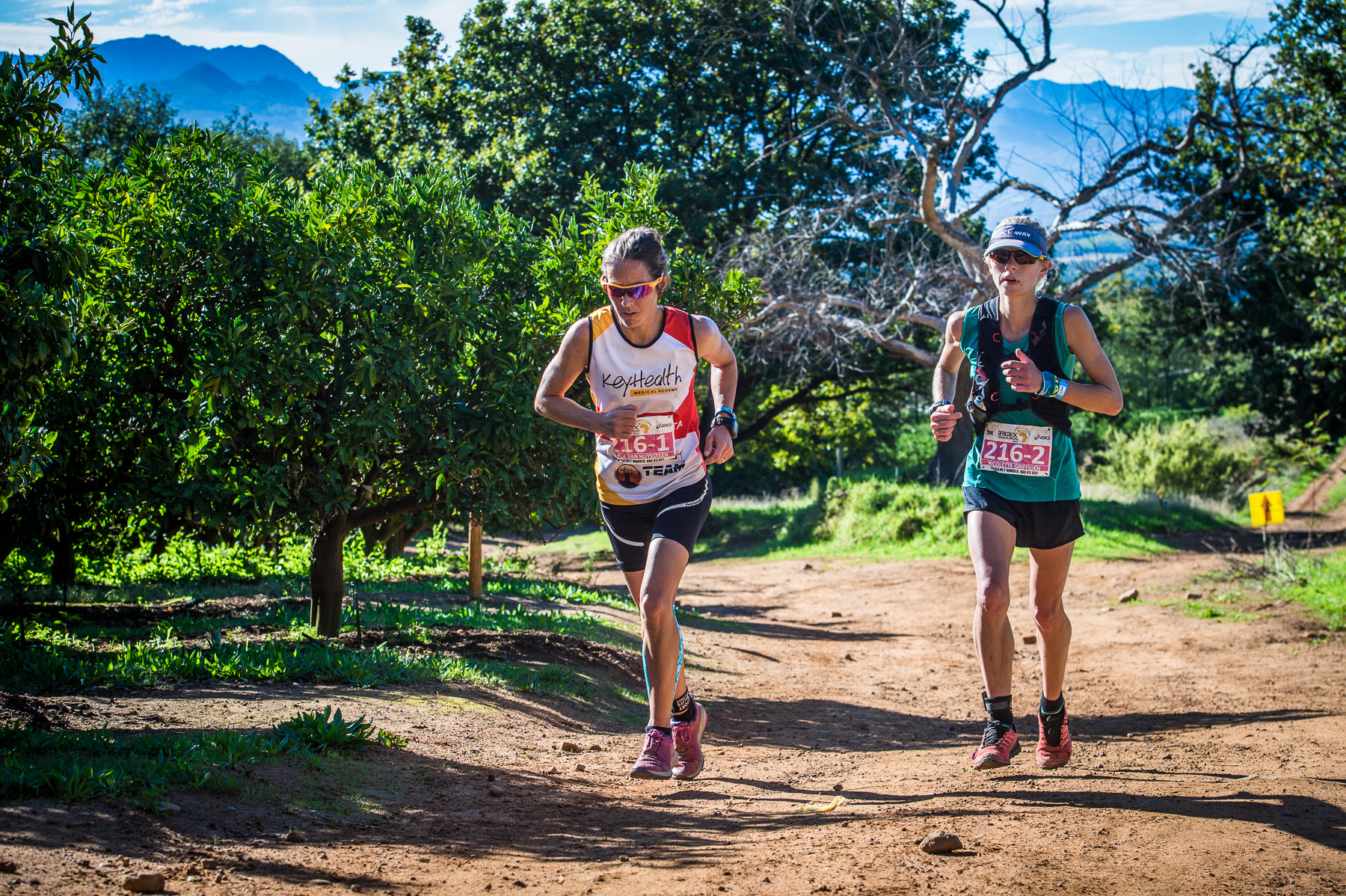 In the women’s race, Team KeyHealth Neverest/K-Way’s Carla van Huyssteen and Nicolette Griffioen’s combined finishing time of 8:36:34 firmly secured them the top spot on the podium.

According to Van Huyssteen, stage three’s open roads did not suit the duo’s (pictured above) running style. ‘We just did what we could and ran as hard as we could. Nicolette has been amazing these past three days. We are really happy with the stage. It’s the camaraderie that brings us back to AfricanX each year.

‘Next year I plan to start a family, while Nicolette will most likely go on to win world champs. I’m just really glad that we could close off our partnership in this way.’

‘We pushed a little on stage one and really enjoyed the trails. This was definitely a positive change to the event. Stage two was long. On stage three we pushed again, just focusing on getting it done. Carla and I raced our first AfricanX together in 2015. My focus is now on endurance racing,’ says Griffioen.

‘Our legs felt good today,’ confirmed Feldmann. ‘We once again just ran our own race and kept it consistent. The AfricanX Trailrun has an awesome vibe. Claiming the mixed team title is amazing. It’s really cool to do that with my partner. It’s just amazing to be able to socialize and do sport at the same time. I’ve wanted to take part in AfricanX for quite some time. Winning is just an added bonus.’

Tokyo looms, again, We don’t know for sure in what shape of form the Olympics and Paralympics will take place in July to September and if anything 2020 taught us to take nothing for granted. What we do know is that if Tokyo 2020 +1 does go ahead, it will do so against a new-found back drop where simply taking… END_OF_DOCUMENT_TOKEN_TO_BE_REPLACED