For someone all but resigned to staying at home and putting her feet up in frustration, CIndy Peters had a fine return from this weekend’s Yellow Pages senior track and field championships in Durban, writes Mark Etheridge.

There was doubt whether the versatile Central Gauteng athlete would travel to the coast after injuring her knee but she even had the satisfaction of a personal best to boast of when she went back to Gauteng.

Her personal best came in the triple jump final where she soared to silver in a new personal bet of 13.39 metres as Charlene Potgieter won with a fine 13.45m.

But it didn’t stop there, she ended the two-day championships with a medal in each of the three events she took part in. She won bronze in the 200m, starting from the unfavourable outside lane eight draw and went on to run 24.26 seconds, this despite falling at the finish line.

And then she combined with her Central Gauteng team-mates to take another silver in the senior women’s 4x100m relay. Helped by a strong finish from Thandiwe Vilakazi, Peters Bernica Mashava and Chante van Tonder combined for a time of 46.92sec in a race won by Athletics Gauteng North (46:12).

Reflecting on her championships, Peters said: ” I felt the knee a bit during the competition but the open wounds are more sore now!. For the first time in my life I was happy with a second place… now it’s Mauritius on the weekend for a bit of a break [at the Combined Events African Championship]. Then USSA championships in Stellenbosch and then it’s time to prepare for the European season.” 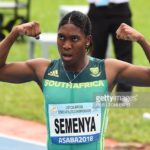 World champ out of Games 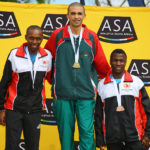