The past weekend was an important one for the country’s canoeing fraternity as 2016 FNB Dusi Canoe Marathon fever continues to intensify.
Many paddlers took to Gauteng and KwaZulu-Natal’s waters in the Euro Steel Highveld Croc and Hi-Q Challenge respectively, two vital Dusi seeding races.
Many of 2016’s FNB Dusi top contenders made the trip up to Johannesburg to take part in the Highveld Croc and it was the experienced duo of Hank McGregor and Jasper Mocké who overcame a day one deficit to win the overall race on Sunday.
Despite having a number of top crews to contend with, including Dusi favourites and Euro Steel team mates Andy Birkett and Lance Kime, the Euro Steel pair of McGregor and Mocké dug deep on day two to secure a confidence-boosting come-from-behind victory.
‘We can look at the result from many different angles,’ McGregor said. ‘Yes, it isn’t on the Dusi route but, with that said, it is a Dusi-type race considering the technicality of the river as well as the portages so it does give us a lot of confidence going forward.’
In their first competitive Dusi together in 2014 the pair managed a second place behind the runaway winners Birkett and Sbonelo Khwela but learning from that race and growing their all-round repertoire has been the focus for McGregor ahead of the 2016 edition.
‘Although we have been partners during the flat-water marathon season, this will only be our second shot at Dusi together. I think we managed to learn a lot from our 2014 race though and we know where we have had to improve this time around.
‘Our running is a lot stronger than it was in 2014 – one area that we knew we had to improve on if we were going to challenge for the overall title this year. Having a strong Highveld Croc against some really good crews was a good sign that our running has improved,’ added the marathon superstar.
As the El Nino weather phenomenon grips the country and atmospheric conditions suggest that paddlers will be in for an ‘old-style’ FNB Dusi, McGregor sees this an opportunity for himself and Mocké to play to their strengths on the water.
‘Personally I think that we will benefit from a low Dusi as flowing water gives the runners a chance to get away if they manage to run away from us. There will be very little assistance from the river which could suit us.
‘The paddling sections could be flat which gives strong paddlers the chance to make up some time and catch guys that might get away on the portages. Dusi won’t be offering any free rides for paddlers, which could play into our hands,’ a cautious McGregor explained.
Being able to put together three full days of consistent, mistake-free paddling will be the key going into Dusi however the current focus for McGregor and Mocké is on remaining healthy up until the 18 February start.
‘It is important that we stay injury free and avoid sickness in these crucial weeks as we start getting closer to the race. We haven’t decided about our remaining pre-races, we’re just taking it a day at a time,’ he stated.
The Hi-Q Challenge was the weekend’s headline race in KwaZulu-Natal and despite his previous outings with his 2014 U18 winning partner Mthobisi Cele, Damon Stamp sewed up a sprint finish win with sprint star Louis Hattingh at Albert Falls Dam.
The Under-23 pair had to fight off a spirited effort from brothers, and potential Dusi top five candidates, Andrew and Alan Houston (USN) with the experienced Jason Graham and Czech Republic paddling star Jakub Adam rounding out the podium.
The women’s race was won by Abby Solms and Tamika Haw – both of whom eagerly await the arrival of their respective Dusi partners; Anna Kosíková from Czech Republic and Alex Adie from Cape Town. The exciting duo of Jenna Ward and Hungarian ace and U23 World Marathon Champion Vanda Kiszli finishing second in their first competitive river race as a combination. 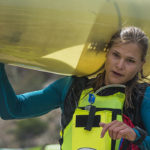 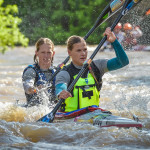