Just as Christoph Sauser acknowledged the late Burry Stander when he won the Attakwas event recently, Max Knox (Specialized) paid credit to the ‘Burry Stander magic’ to win the MTN Barberton ultra-marathon mountain bike race for a record fourth┬átime at the weekend.

When Knox entered the stadium, he slowed down and pointed one finger up to the sky in a salute to Stander who was tragically killed by a taxi on a training ride earlier this year.

Knox made it clear that his sole motivation for the duration of the race was to ride a good race in honour of Stander. Spectators at the finish noticed that Knox rode in a Specialized jersey with Stander’s name emblazoned on the back.

When Knox signed up to ride for Specialized, he did not have any kit at first and Stander gave him one of his own jerseys. This was the same jersey in which Knox won the Barberton ultra-marathon.

The race was a classic duel between Knox and Matthys Beukes (Contego). The duel began during the second lap when Knox attacked at the beginning of the last serious climb. Beukes was the only rider who was able to take on Knox, turning the race into a thrilling contest.

Beukes was slightly stronger on the climb, managing to stay about 10 seconds ahead of Knox, but going downhill Knox attacked and regained the lead.

Unfortunately for Beukes, he ‘bonked’ with about 5 kilometres to go. ÔÇ£Maybe it happened because I did not eat enough during the race. I simply had nothing left in my legs. All I could do was pray that nobody would pass me during the last few kilometres,ÔÇØ Beukes said. Luckily nobody did.

Knox’s winning time for the race over 110 kilometres was five hours 17 minutes 32 seconds. Beukes was second in 5:19:15 and Charles Keey (Cannondale/Blend Properties) third in 5:19:52.

Before the race Knox had chosen to play down his chances of winning. ÔÇ£I am not ready yet.┬áIt is too early in the season.┬áI am planning to peak later on.┬áIt will be anybody’s race.”

Beukes’s second-place finish came as a bit of surprise, especially because he mainly focussed on cross-country racing during previous seasons. ÔÇ£I decided to compete more often in the ultra-races. At long last I got the hang of racing over such long distances. But I still plan to compete in cross-country races as well.ÔÇØ

It was exciting to notice on Saturday that, for the first time in years, the race was not dominated by the same riders. Riders who impressed were Keey and Darren Lill (both Cannondale/Blend Properties), Erik Kleinhans, Lourens Luus and Waylon Woolcock (all RE:CM) as well as Rourke Croeser (Kargo /Orange Monkey).

Kleinhans is definitely stronger and fitter than he ever was. On Saturday, however, he was extremely unlucky.┬á┬áIt looked like a forgone conclusion that he would finish third but, when it mattered most, he was brought to a standstill by mechanical problems.

Lill impressed on the first climb. He attacked seconds after Knox complained about the negative racing. At that stage it seemed as if everybody was just racing against Knox, waiting for him to do something. Lill attacked and managed to obtain a lead of about two minutes on Beukes and Philip Buys (Scott) and another two minutes on the rest of the riders.

Unfortunately he also ended up being a victim of mechanical problems. 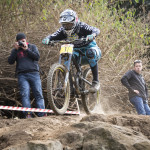 Garlicki keen to get going on home turf

Ernst up against former Formula One ace at Brands Hatch

Tokyo looms, again, We don’t know for sure in what shape of form the Olympics and Paralympics will take place in July to September and if anything 2020 taught us to take nothing for granted. What we do know is that if Tokyo 2020 +1 does go ahead, it will do so against a new-found back drop where simply taking… END_OF_DOCUMENT_TOKEN_TO_BE_REPLACED