Monday was a day for the underdogs as the Premier Hockey League (PHL) reached the semi-final stage in Johannesburg.

After a tournament of turnarounds, the teams that finished bottom of both the men’s and women’s logs in 2016 booked their places in the 2017 final, to be played at the Randburg Astro on Tuesday.

The Orange River Rafters will face the Private Property St Lucia Lakers for the women’s title and the ProGrip Drakensberg Dragons will take on the Crossroads Maropeng Cavemen for men’s honours.

The Rafters barely made it into the semi-finals. They had to pull off a remarkable bonus-point victory over the defending champions, the Tivoli Blyde River Bunters, in their last group game yesterday and then still relied on other results to go their way.

But, taking on the same opponents in Monday’s semi-final, they once again produced an upset of note – rising from bottom place in 2016 to a guaranteed top-two spot and an unlikely shot at the title.

It was a tight first half, with the Bunters looking far better than they did during their 3-0 loss to the Rafters yesterday, and the scoreboard remained unmoved by half time. It was then Donna Small who found the back of the net early in the third quarter to give the Rafters the lead, one they never relinquished.

Captain Sulette Damons slotted in a second early in the fourth quarter to seal the 2-0 win – and take her to the top of the tournament’s goal-scorers list.

While the Bunters brought on a kicking back with seven and a half minutes to go, it was to no avail as the defending champions could not find the elusive goal they sought.

‘We said that the hardest thing to do is to beat a team twice and after we beat them yesterday we knew it was going to be tough because they’d come out firing,’ said Small afterwards. ‘We believed that we could do it. We’re just lucky that we stuck together, kept to the structure, and pulled it off so we’re really stoked about that.’

Describing her goal, the striker added: ‘Oh my goodness – I think my eyes were closed the entire time. I just saw the ball coming across and put my stick out there and I was just lucky to get it, I think. It was really important though. To score the first goal gave us confidence. But anyone could have scored it. I was just in the right place at the right time.’

Speaking about taking on the St Lucia Lakers in Tuesday’s final, Small said: ‘We lost to them in our first game. But I think we’ve learnt a lot throughout the whole process of PHL – and they have too so I think it’ll be completely different teams. Same people but better structures, so we’re excited to play them and hopefully pull off a win there too.’

The Lakers booked their spot in the final with a 2-0 win over the Old Mutual iWYZE Namaqualand Daisies in their semi, thanks to goals from Kara Botes and Tiffany Jones.

‘It’s a great feeling. We really worked so hard and I’m just so proud we’re into the final,’ said 17-year-old Bianca Wood afterwards. ‘I think we just came out with a lot more energy and we knew we had to win and wanted it more. We really showed our potential and used our chances.’ 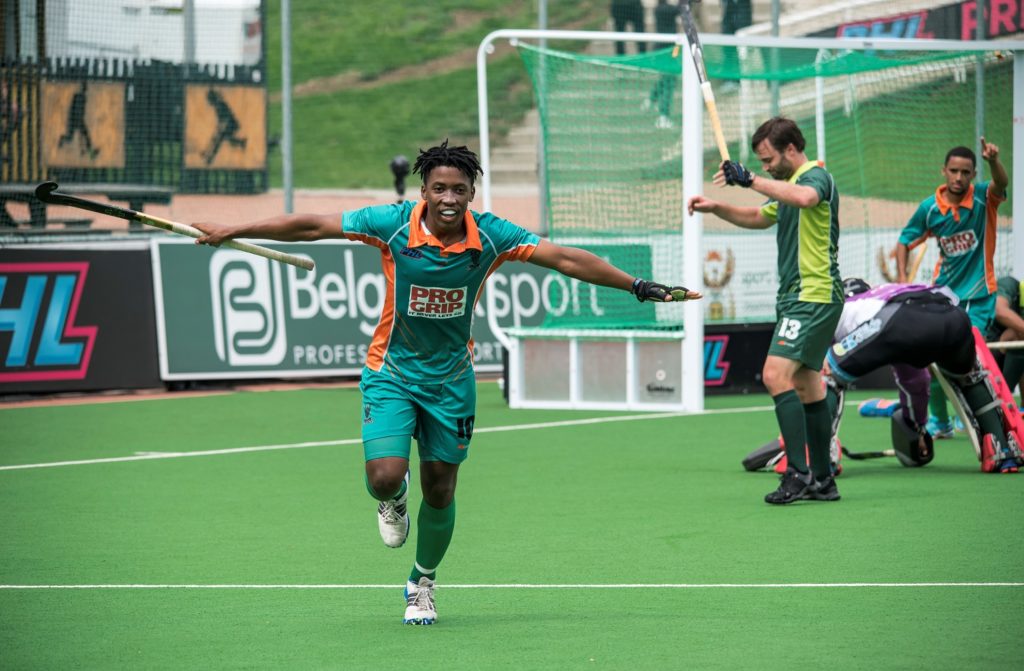 Meanwhile, in the men’s competition the Dragons continued their rapid rise from being last year’s wooden spoon recipients with an impressive 5-2 win over the Mapungubwe Mambas in their semi-final.

The Dragons went 4-0 up before the Mambas could register a goal, and with that cushion already safely in place by half time, they were never really troubled.

Coach Sihle Ntuli said afterwards he was not surprised by the massive win. ‘For us internally in the group – this is really what we believe we deserve.

‘Last year hurt coming sixth. Like I’ve said before, when we look at all our games, even last year, our stats were always in our favour but we haven’t been able to convert our chances so for this to happen today in the way that it has – we hope that we can continue that into tomorrow and finish off what’s been a good three weeks for us.’

Speaking about taking on the Cavemen in the final, Ntuli added: ‘The Cavemen are defending champions obviously. They’ve got a lot of experience. I know some of the more experienced guys have picked up a couple of niggles but I’m sure they’ll get onto the park and add value.

‘If you look across the field, they’ve got senior players in all the different lines so they’re a very well-balanced team and as we all know, a big threat on short corners so it’ll be a difficult game.’

The Cavemen continued their march to defending their title by handing the Kilimanjaro Addo Elephants a humiliating 6-1 defeat, in a repeat of last year’s final.

A hat-trick from Lance Louw did much of the damage with Cerezo Comerasamym, Hendy Seerane and Michael Abrahams scoring the other goals for the 2016 champions.

No Pietie for Proteas

Tokyo looms, again, We don’t know for sure in what shape of form the Olympics and Paralympics will take place in July to September and if anything 2020 taught us to take nothing for granted. What we do know is that if Tokyo 2020 +1 does go ahead, it will do so against a new-found back drop where simply taking… END_OF_DOCUMENT_TOKEN_TO_BE_REPLACED