As a badminton player Bongani van Bodenstein has the perfect record, having won the South African singles title in every age group that he has competed in.

But 2017 is going to be his proverbial ‘Rubicon’ – it’s the first time the 19-year-old TuksBadminton player will be officially competing in the senior ranks. He’s not that fazed about it, because he believes that on a good day he is capable of beating any of the South African top senior players.

Last year he played one match against the current South African senior champion, Andries Malan, and lost in two tight sets. However, he is confident of reversing the result the next time they play.

Van Bodenstein’s confidence in his playing abilities is justified. At last year’s University South Africa Championships, he won the singles, doubles and mixed doubles which led to him receiving the Player of the Tournament Award. Another highlight was winning three medals at the 2014 African Youth Games which took place in Gaborone, Botswana.

Part of his success is that he’s a true student of the game and never misses an opportunity to learn something new about badminton. When he played a tournament in Bangkok, he talked to players to find out how they work towards improving their game. An Indonesian player helped him understand that it is all about hard work.

That particular player is part of a training squad that does nothing but train all day –  a luxury that Van Bodenstein as a student cannot afford to do.

Another South African player who was at last year’s Rio Olympic Games helped him learn about the importance of economic footwork.

Chinese players who dominate international badminton apparently don’t waste energy by trying to anticipate where their next opponent is going to hit the shuttlecock as they don’t want to risk being wrong-footed.

They prefer to recover after an exploding shot and wait to see where the next shot will be before moving.

Van Bodenstein also learned from his own personal experience about the importance of fitness. ‘When you play at a senior level it’s not just about the quality of your shots, trying to move your opponent around in the hope of catching them of balance.

‘You need to be fit because in badminton you are constantly thinking about your next move. Sometimes it is a case of out-thinking your opponent rather than just outplaying him.

‘That is why at TuksBadminton we spend up to three hours a day training. Apart from working on improving our technique, we also spend a lot of time on doing speed work, endurance and working on our agility.’

In what should be no surprise, the University of Pretoria BCom Accounting student is also clued up about badminton’s trivia.

When it was mentioned that badminton is considered the fastest racket sport in the world, he immediately responds by saying the fastest recorded shot was measured at 441km per hour. ‘It was a smash played at Malaysian tournament last year,’ said Van Bodenstein. 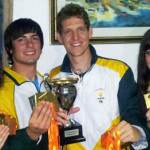 Schoonees cleans up at badminton’s WP Under-19 Open

Tokyo looms, again, We don’t know for sure in what shape of form the Olympics and Paralympics will take place in July to September and if anything 2020 taught us to take nothing for granted. What we do know is that if Tokyo 2020 +1 does go ahead, it will do so against a new-found back drop where simply taking… END_OF_DOCUMENT_TOKEN_TO_BE_REPLACED