Breaststroke sensation Cameron van der Burgh has signed a new deal that will see him swap his swimsuit from Blueseventy to Arena. It’s a huge endorsement of the South African’s talent and potential.

Says Arena Marketing Director Giuseppe Musciacchio: ÔÇ£The decision to bring on board a young champion as Cameron van der Burgh is a confirmation of Arena’s commitment to select and support the best swimming talents at world-wide level.ÔÇØ

Van der Burgh, who is still just 21 and is coached by Dirk Lange (who was in charge of the South African team in Beijing but didn’t have his ciontract renewed and has subsequently become head coach of his native Germany), broke three world records last year in the Blueseventy suit as he charged up the rankings. He was also named Fina World Cup swimmer of the year for 2008.

Ther had been a call from mainly European coaches to outlaw the Blueseventy as they felt it was a ÔÇ£flotation deviceÔÇØ. However, the process and verdict is a long one and won’t ne known any time soon.

Van der Burgh is adamant that he’s in the best company by switching to Arena. ÔÇ£I finished 2008 was with outstanding results, with the world records achieved during the Fina World Cup, which prove my extremely good shape at this moment. The possibility to co-operate with Arena, a leading technical partner that can offer the most advanced and innovative technology, represents for me a clear acknowledgement of the sports results achieved in the last two years, as well as a strong motivation to do even better in the future.ÔÇØ

Added Musciacchio: ÔÇ£Arena Elite Team key objective is to get the most out of a superb mix of Olympic stars and young champions of the future. Cameron is absolutely at the cutting edge of South African swimming. 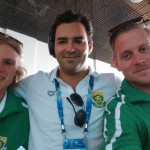 Aaron’s back on top

Tokyo looms, again, We don’t know for sure in what shape of form the Olympics and Paralympics will take place in July to September and if anything 2020 taught us to take nothing for granted. What we do know is that if Tokyo 2020 +1 does go ahead, it will do so against a new-found back drop where simply taking… END_OF_DOCUMENT_TOKEN_TO_BE_REPLACED