Ernst van Dyk continued his ride into history when he won for a record eighth time in the men’s wheelchair race of the Boston Marathon. It equalled the women’s wheelchair legend Jean Driscoll’s Boston wins and cemented the South African’s legacy as a true great.

Van Dyk, who won the race for the first time at the age of 28 in 2001, led from the first kilometre and finished in 1hr 33min 29sec, to pick up his eighth gold medal in the last nine years. His only defeat was in 2007.

The South African, also a Paralympic gold medallist, got across the line in the slowest of all his victories (previously 1:28:32) but he was never challenged and continues to set the standard in his discipline.

She ended up winning the Masters division to┬á earn $10,000 for that category win and $7,400 for her eighth spot. 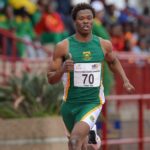 Leotlela lays down a marker with 100m SA junior record

Van Niekerk is SA’s only chance at IAAF awards

By GARY LEMKE in Tokyo On the third day of staying in the Paralympic village bubble “it” finally dawned on me. “It” wasn’t the sheer visual aspect of the 4 000-plus Paralympians with disabilities all in the same environment of towering 17-storey apartments and surrounded by a 4km perimeter fence. Admittedly, that is the initial and most common conclusion of… END_OF_DOCUMENT_TOKEN_TO_BE_REPLACED