He will be tasked with leading the team through to the 2022 Hockey World Cup.

Van Ginkel is an experienced campaigner when it comes to the sport, and assisted Sheldon Rostron in the South African men’s and women’s camps when both sides won gold at the African Cup of Nations 2017.

‘I feel exceptionally privileged to be offered this role for the next four years,’ Van Ginkel said. ‘I have been with the national team in different roles over the last 10 years, so I’m really excited to be the head coach and try and achieve the vision and mission that I’ve set out to do.’

Van Ginkel served as an assistant coach to the Austrian national men’s team, where they finished seventh in the EuroHockey Championship, and was also part of the coaching staff at the Delhi Waveriders in the Hockey India League for four seasons, including their title-winning season of 2014. He has also coached the South African U18 and U21 teams, and guided the Namaqualand Daisies to the semi-finals of the 2017 Premier Hockey League.

Van Ginkel holds an honours degree in sports science and is currently the director of hockey at St Stithians College in Johannesburg, a position he will continue to fulfil.

‘The reason I could take this job is that I have the school’s blessing to be the national coach and fulfil that role while still staying at Saints,’ Van Ginkel added. ‘The position is a non-paid one and is entirely voluntary so it would be impossible to do this job without the backing and support of St Stithians.’

Van Ginkel will begin his reign with a summer series in January with an eye on the Open Series Final in Madrid, an Olympic qualifying event. 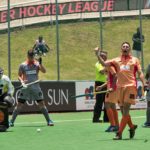 Clark’s men get their first point at London Games

Tokyo looms, again, We don’t know for sure in what shape of form the Olympics and Paralympics will take place in July to September and if anything 2020 taught us to take nothing for granted. What we do know is that if Tokyo 2020 +1 does go ahead, it will do so against a new-found back drop where simply taking… END_OF_DOCUMENT_TOKEN_TO_BE_REPLACED