LJ van Zyl will be looking to continue the form that has brought him both a national 400-metre hurdles record and a 2011 world-leading time when he lines up for the third IAAF Samsung Diamond League track and field meeting in Rome, Italy on Thursday evening.

Van Zyl’s 47.66 national record, run in Tshwane earlier this year, is the fastest time in the world this year and indeed the world’s second and third fastest time also belong to him.

Early days yet with the World Championships in Daegu, Korea in August but exciting times for the young South African. He’s already tasted Diamond League success this year, having won the 400m hurdles in the opening meeting in Doha on 6 May, a race where he counted former world champion Bershawn Jackson among his victims.

Van Zyl is riding a rich wave of form right now, having also lopped a heap off his 400m flat best when he ran 44.96 so he won’t be doing any retreating in Rome.

“Sure, it’s a big race for me,” Van Zyl told Road to London 2012 from Rome on Wednesday. “We’re off at 8pm local time and I won’t really be worried out the time I run, the win is more important right now. The good news is also that my coach [Hennie Kotze] is coming over to Europe to help with the coaching for about 10 days. That will be a huge help to have him here.”

While Van Zyl is looking to further his form, world 800m champion Mbulaeni Mulaudzi gets his European campaign underway when he runs the two-lapper. He would have taken on world recordholder David Rudisha but the Kenyan has pulled out with a bout of tendinitis.

Still in the field though are world champion Kirwa Yego, also of Kenya along with the impressive Boaz Lalang.

Commonwealth Games javelin champion Sunette Viljoen is also lining up. Her best this year is 58.70m and she comes up against Olympic bronze medallist Christina Obergfoll and and silver medallist Mariya Abakumova, both of whom have gone over 64m already this year.

Not that this is worrying Viljoen. “I’ve been extremely hard at training and preparation for the European season,” she said this week. “I’ve trained to the best of my ability for the next four big meetings that I’m throwing at. I’m not putting any pressure on myself but just want to consistently throw over 60m and then qualify for World Championships in August. Qualifying mark is 61m and I’ll just be looking for solid performances at every meeting from now on.”

Finally, there’s middle-distance ace Peter van der Westhuizen. The US based athlete is more familiar with the 1500m and mile athletes but on this occasion lines up for the 5000m. While he won’t be harboring any hopes of victory in a quality field, he will hope to be dragged along to a quick time. His best is a 14:20.65 and in this sort of field he could well go quicker than that. 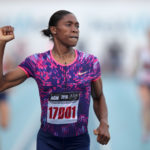 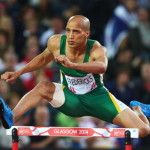 Fredericks shakes off injury woes and focuses on getting faster