American athlete Johnnie O. Jackson and Germany’s Regiane da Silva were the star performers at Sandton Convention Centre on Friday night, earning the two veterans pro bodybuilding and fitness titles at the Arnold Classic Africa in their farewell seasons on the professional circuit.

Jackson was pleased to close out his lengthy international career by lifting the pro bodybuilding crown, with the 46-year-old powerhouse defeating a line-up packed with younger opponents.

‘I really can’t explain it. This has been a lifelong dream of mine,’ Jackson said. ‘This is officially my last year competing, so to walk away with my first Arnold Classic title, and my fifth title overall, is fantastic.

‘Thanks to everyone involved in the organisation of these events, which gives all of us an opportunity to keep doing what we love.’

‘I’ve waited for this moment for the last 11 years. Thank you so much,’ Da Silva said.

In the pro strongman contest, 24-year-old Polish giant Mateusz Kieliszkowski secured the title with 52 points, and the youngster warned there was plenty more to come from him over the next few years.

‘I’ve been training harder and harder every day, for four to six hours, because I want to be better,’ Kieliszkowksi said.

Earlier on day two in Sandton, iconic former bodybuilder Arnold Schwarzenegger brought some additional star quality to the event, as the founder of the global multi-sport series officially opened the second edition of the Arnold Classic Africa before going on a walkabout of the venue.

‘We want to bring the celebration of health and fitness to South Africa. This is a fantastic place – I love this country – and we have been received with open arms,’ Schwarzenegger said.

‘We have over 60 nations participating in various sports, and this is truly an exciting health and fitness festival. This is all about getting people off the couch and exercising every day.’

Schwarzenegger went on an extensive tour of the building, followed by a host of adoring fans, as he stopped to interact with sports enthusiasts, exhibitors and athletes from the different sporting codes.

Halfway through his tour of the building, Schwarzenegger made a brief stop for a game of chess against a team of primary school children. Unable to match their collective effort, the former Governor of California was forced to concede a friendly defeat.

‘This is a very successful second year. Last year we talked about making it bigger and better and that is exactly what is going to happen, just like the other five continents,’ Schwarzenegger said.

‘This is the sixth continent where we host the Arnold Classic sports and fitness festival and on all the continents it is growing and growing, which is what we see here in South Africa.’

The Arnold Classic Africa is a melting pot of sports with more than 50 different codes showcased at the event.

The festival features various Olympic disciplines, including gymnastics, rowing, badminton and fencing, as well as some of the newest and fastest growing codes such as dance sport, rope skipping and sport climbing.

The largest showpiece of its kind in Africa, the annual event is held in partnership with the Gauteng provincial government, the City of Joburg and the SA Sports Confederation and Olympic Committee (SASCOC). 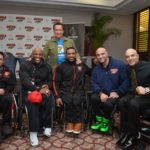 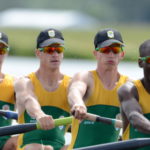