Wheelchair Basketball SA celebrated its 14th year of partnership finals with DsTV giants SuperSport and what a way to celebrate — Saturday’s final was contested by two old-time rivals, the Pretoria Bladerunners and the AGA Matlosana Lions at a packed Vodacom Mandeville Indoor Stadium.

The venue was drowned by drums, dancing and signing and the Lions made their presence felt by taking the first quarter 20-18 by scoring on the buzzer.

In a tense fight back, Blades captain Marius Papenfus pulled the game back for the Blades with an impressive 12-point scoring spree ending the half at 38-31 in their favour.

The tenacious Lions, led by captain Thandile Zonke, returned the captains honour by scoring eight points to tie the third quarter at 48-all. To thunderous noise by the Lions supporters, the score was tied at 58-58 by Lions Luvuyo Mbanda and with just six seconds left on the clock, Papenfus scored under pressure to give the Blades a two point lead.

As the seconds ticked by Mbanda was placed under huge pressure by the Blades defence, but successfully pulled a foul. But he could not capitalise on the quick inbound, and agonisingly losing the 2010 Series title to an ecstatic Blades coach, Richard Andriessen who also picked up the Coach of the Series Award. Blades have now won the title an impressive seven times since inception in 1997.

The bronze play-offs where contested by the two powerhouses & former champions of wheelchair basketball, The Discovery Eagles and the Visa Wings.

The first quarter saw the Wings edging the Eagles by a solitary point taking the lead 14-13and then under Eagles Captaincy, Marcus Retief tied the half at 27-27 and set up a die or winner-take-all second half.

Between the Eagles’ big men, OD Mdingi and Luyanda Mtwalana, their domination of the boards subdued Wings Simange Mbhele to finish off the third quarter by taking a slender three-point lead. Eagles Grant Waites then found renewed resources and destroyed the Wings defence by scoring 10 points under the hoop in the final quarter to secure victory 61-49 and sending the Durban based boys home with clipped wings and holding onto their bronze title.

Eagles’ OD Mdingi took home the Man of the Match title scoring nine points, taking a total of 10 rebounds, and one assist in his 30 minutes of court time. Eagles finished the season with 16 games, 12 wins and four losses, with an average score of 56 points per game. 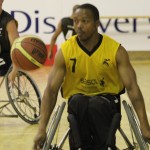 AmaWheelaboys training hard to book place in Rio next year

By GARY LEMKE in Tokyo On the third day of staying in the Paralympic village bubble “it” finally dawned on me. “It” wasn’t the sheer visual aspect of the 4 000-plus Paralympians with disabilities all in the same environment of towering 17-storey apartments and surrounded by a 4km perimeter fence. Admittedly, that is the initial and most common conclusion of… END_OF_DOCUMENT_TOKEN_TO_BE_REPLACED