On Sunday morning, 18-year-old Caitlin Rooskrantz should have been making history as South Africa’s first female artistic gymnast in 15 years to compete in the Olympic Games. Yet, because of the Covid-19 pandemic, all plans were interrupted.

So on the same day she should have been competing in Tokyo, Sanlam gave Caitlin the chance to make some new plans: by live streaming her routine.

Thousands of South Africans from all walks of life and every corner of the nation cheered Caitlin on from the other side of their screens as she performed her Olympic routine.

Slowly approaching the bars, softly whispering under her breath as she walked, the backdrop felt unfamiliar and surreal. She took one final deep breath and stepped up to the mat, and flung from one bar to the next in a near-perfect routine.

By midday, the hashtags #TheOlympian and #CaitlinRooskrantz were trending on social media and, for a brief while at least, there was some good news we could all unite behind.

‘I am so proud of Caitlin’s routine,’ said coach Ilse Pelser.  Having trained Caitlin since she first took an interest in gymnastics at the age of six, it was only fitting that Ilse would be right beside her. ‘Years and years of hard work are paying off,’ Ilse said. ‘It was fantastic being out there with her – to see her do one of the best routines of her life.’

Watching from the sidelines, mom Veda is not only Caitlin’s fiercest supporter, but her greatest inspiration too. Having single-handedly raised and supported her two kids after her husband (and Caitlin’s father) passed away 12 years ago, the live stream was a special milestone for the family. ‘It wasn’t easy getting to this point, but it was so worth it. Watching her today, and seeing her efforts celebrated across the country, I felt so proud of how far she has come – it’s exceeded our every expectation!’

Caitlin expressed her elation and relief. ‘I’m over the moon. I was nervous about it, but I gave it my best and I’m so proud of the end result – especially considering that I’ve been in lockdown for over three months and have only been back training for a month. I’m so grateful for this incredible opportunity, and I’m more motivated than ever. The dream hasn’t changed, only the timeline.’ 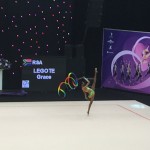 Beckett and Cummins have Rio in their sights

By GARY LEMKE in Tokyo On the third day of staying in the Paralympic village bubble “it” finally dawned on me. “It” wasn’t the sheer visual aspect of the 4 000-plus Paralympians with disabilities all in the same environment of towering 17-storey apartments and surrounded by a 4km perimeter fence. Admittedly, that is the initial and most common conclusion of… END_OF_DOCUMENT_TOKEN_TO_BE_REPLACED