Another year with different challenges, but the UP Tuks judokas made sure the result that matters remained the same over the weekend by winning the USSA Tournament for the fourth consecutive year in Cape Town.

This time around, being crowned national university champions was indeed more special as the Tuks team were not at full strength.

Two of Tuks’ top female judokas, Michaela Whitebooi and Unelle Snyman, could not compete as they were representing South Africa at the World Championships in Baku, Azerbaijan.

Credit for the UP Tuks dominance certainly must go to Nikola Filipov. The former Bulgarian Olympian has been coaching at the university for the last 11 years.

As a coach, Filipov is as hardcore as they come, not believing in second chances. He is also a firm believer in utter dedication. He has a definite opinion as to what it takes to succeed in judo.

‘It is all about having a real fighting spirit. In judo, it will never be just about how perfect you are able to execute a technique, or how strong and fit you are. Everybody is strong and fit. To become a champion, you have to be able to push yourself to the edge of your limits day in and day out.

‘Trust is also of the utmost importance. When I tell a judoka to do something, he should not try and second guess me. The moment he does, the trust is broken, and then failure becomes a reality.’

Any Tuks judoka will tell you that having Filipov next to the mats when fighting is a huge added benefit as he is a brilliant strategist who is able to summarise what needs to be done to ensure a victory within seconds.

During Friday’s individual competition, the UP Tuks judokas dominated, winning no less than eight gold medals and four silver medals.

Jaydi Stemmet received the award for the fastest ippon during the tournament by winning a fight in a mere four seconds. Meiring was the second-fastest winner, needing only five seconds to clinch a victory.

An ippon is awarded for a technique that is judged as decisive. It is usually a move that connects cleanly, with good form and little opportunity for the opponent to defend against it.

PHOTO: The triumphant Tuks judoka side in Cape Town, by Ilze Wicksell 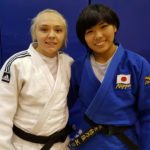 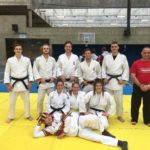 Weakened Tuks team still too tough for the rest

By GARY LEMKE in Tokyo On the third day of staying in the Paralympic village bubble “it” finally dawned on me. “It” wasn’t the sheer visual aspect of the 4 000-plus Paralympians with disabilities all in the same environment of towering 17-storey apartments and surrounded by a 4km perimeter fence. Admittedly, that is the initial and most common conclusion of… END_OF_DOCUMENT_TOKEN_TO_BE_REPLACED