Michaela Whitebooi doesn’t let her guard down often. Nor should she, because in her sport one lapse of concentration, one mistake is punished in an instant, not to mention painful. Judo is not for sissies, writes GARY LEMKE in Rabat.

And, despite her small stature – she competes in the -48kg weight division – this 23-year-old old who fights out of the High Performance Academy at the University of Pretoria, is a heavyweight name in the making. She’s quietly making her way up the world rankings, having won the Under-21 African Championships in 2015 and then being crowned senior African champion in Cape Town earlier this year.

Now she has a silver medal at the African Games to add to her growing collection. Another big moment comes her way on Monday when she walks out as flag bearer for TeamSA at the opening ceremony of the 12th African Games in Rabat, Morocco.

TeamSA chef de mission Desiree Vardhan says it was a unanimous decision to award the honour to the judo player. ‘Congratulations to Michaela. She’s a credit to her sport, her country, to her family and friends and herself. It’s not often that you see an athlete from a “smaller code” walk out as flag bearer but Michaela deserves the accolade. It’s also significant that we are celebrating Women’s Month, which adds to the importance of the occasion.’

Gideon Sam, the president of SASCOC, which delivered TeamSA to these African Games, agrees. ‘It’s never easy arriving at the appointment for a flag bearer, but I join the team and the country in saying, |congratulations Michaela, enjoy the moment and continue making yourself and the country proud”.’

Whitebooi originally hails from Port Elizabeth but now calls Pretoria home where she is enrolled at Tuks. She has spent nearly half her life without a father around and it has been her mom, Minnie, who was employed as a domestic worker and who kept things together when they could so easily have fallen apart. ‘My dad passed away some 10 years ago … I don’t know the exact circumstances but it was something with his heart. My mom had to take on the roles of both parents. It was a challenge for her and it still is. Although I live in Pretoria we are still very close. But she’s not here in Morocco for the African Games. She doesn’t watch my contests … she’d be too much of a nervous wreck if she did, but she follows my results updates!’

Whitebooi tends to keep her own counsel, she gets on with her business quietly and doesn’t like to be the centre of attention. And she sets the highest standards. ‘I was angry, very angry … with myself,’ she said of her silver medal. ‘It was an opponent that I had beaten before and I should have beaten her, I just wasn’t aggressive enough,’ she says of her silver medal. What she doesn’t tell is the fact that she hadn’t had a warm-up because she had not been told what time her final would be and she was caught cold, while her Moroccan opponent, the home favourite, would have benefited from ‘home advantages’.

In 2018 Whitebooi obtained her BComm Financial Science degree and is now busy with her Honours.

‘If it were not for judo, I would probably have dropped out of school as a lot of my friends did. Where I grew up gangsterism and drugs are a reality. So who knows how my life would have played out? I love judo but with this love comes a great responsibility to work hard. For me, judo has always been a means to make something of my life, through it I got the opportunity to study and get a degree. From the start it was non-negotiable. I had to pass my studies.’

Another major factor in her life has been the Bulgarian coach Nikola Filipov, who has taken her under his wing and has been a sort of ‘surrogate father’ for nearly a decade. ‘I owe much to Nikola, our coach at  Tuks HPC. He is constantly passing on his knowledge of judo, as well as of life, because just like we want the best for ourselves he wants the best for us,’ says Whitebooi.

There’s little doubt as to the part Filipov is playing in the rising success of judo in South Africa. A strict disciplinarian and a perfectionist who demands nothing but 100 percent from his athletes, the former European champion and 1992 Olympian is a visible driving force behind the team. He treats Whitebooi like a daughter, while he also has a lot of praise for Unelle Snyman and Jasmine Martin, saying ‘she is one of the best 18-year-old prospects in world judo’.

Filipov was ejected from his chair next to the mat during Whitebooi’s semi-final victory for ‘too much coaching’, but he is adamant he was harshly treated and it wasn’t him doing the talking, but that of his opponent’s coach. A passionate man, he exudes a tough exterior, but inside, when he strides out for the opening ceremony with TeamSA at the Prince Moulay Abdellah Stadium, he will be as proud as each and every one of his teammates as he soaks up the moment.

And then, shortly afterwards, Michaela and Filipov will be amongst those heading off to the world  championships in Tokyo. 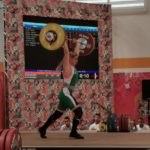 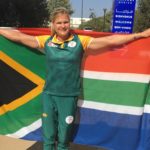 Hartley ‘honoured’ to be flag-bearer

By GARY LEMKE in Tokyo On the third day of staying in the Paralympic village bubble “it” finally dawned on me. “It” wasn’t the sheer visual aspect of the 4 000-plus Paralympians with disabilities all in the same environment of towering 17-storey apartments and surrounded by a 4km perimeter fence. Admittedly, that is the initial and most common conclusion of… END_OF_DOCUMENT_TOKEN_TO_BE_REPLACED