The South African women’s football side suffered their second defeat at the World Student Games in Gwanju, South Korea on Saturday, writes Mark Etheridge.
After having losing out by a single strike in their 1-0 loss to the United States on Thursday, the South Africans lost to Canada in the Group D match played at the Naju Public Stadium.
Jessie Canlish put the Canadians 1-0 up in the 15th minute and Audrey Lagarde added another in the second half.
Sduduzo Dlamini picked up a yellow card for the South Africans who now bring up the rear in their group.
Their final game of the pool stages for Refiloe Jane’s girls is against France on Monday. 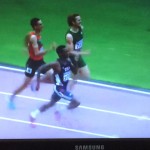 SA’s top students gear up for action in Gwangju 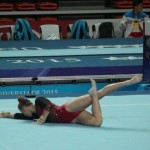 Cummins carries over her good form in Student Games final

By GARY LEMKE in Tokyo On the third day of staying in the Paralympic village bubble “it” finally dawned on me. “It” wasn’t the sheer visual aspect of the 4 000-plus Paralympians with disabilities all in the same environment of towering 17-storey apartments and surrounded by a 4km perimeter fence. Admittedly, that is the initial and most common conclusion of… END_OF_DOCUMENT_TOKEN_TO_BE_REPLACED