Our Elizna Naude’s task of defending her Commonwealth Games discus title got that much easier on Tuesday.

This after Australia’s world champion, Dani Samuels, became the latest athlete to pull out of the trip to New Delhi, India, citing worries over her health and safety. She’s the first Australian to pull out of the Games, that have become increasingly plagued by fears over Dengue Fever, security concerns and the athletes’ village not being up to required standards.

Samuels, 22, won the world title in Berlin last year and would have been one of the favourites to take gold in India. She won the bronze medal at the last games in Melbourne where Naude’s throw of 61.55 metres was good for gold.

Samuels’ manager, Hayden Knowles was quoted as saying: “The situation has been bothering her for some time and the events of the weekend made it real.”

Security fears were heightened at the weekend when attackers on a motorbike opened fire on a tourist bus in New Delhi, wounding two Taiwanese nationals.

Other high-profile athletes not making the trip to Delhi include sprint sensation Usain Bolt, although he has said from an early stage that the Commonwealth Games never featured on his 2010 schedule. This before he was injured during the European season.

Three more Commonwealth track and field champions not going to Commonwealth are Christine Ohuruogu, Phillips Idowu and Lisa Dobriskey.
Triple jump champion Idowu, 31, said on his Twitter feed:┬á “Sorry people, but I have children to think about. My safety is more important to them than a medal.”

Ohuruogu, 400m champion, is concerned about aggravating a leg injury while Dobriskey won’t defend her 1500m title, also due to injury problems.

And another huge drawcard would have been 800m ace David Rudisha. But the Kenyan, who recently broke the world record twice in the space of a week, cited fatigue as the reason for staying at home and said he wanted to spare his energies for next years World Track and Field Championships in Korea. 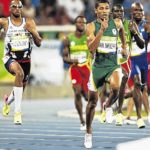 Olympians set to light up night at ASA Speed Series

By GARY LEMKE in Tokyo On the third day of staying in the Paralympic village bubble “it” finally dawned on me. “It” wasn’t the sheer visual aspect of the 4 000-plus Paralympians with disabilities all in the same environment of towering 17-storey apartments and surrounded by a 4km perimeter fence. Admittedly, that is the initial and most common conclusion of… END_OF_DOCUMENT_TOKEN_TO_BE_REPLACED