Anrune Weyers closed off a glittering Paralympic Games career when she finished fourth in the women’s 200m (T47) final at a wet Tokyo Olympic Stadium on Saturday night. In the evening’s other track final, Mpumelelo Mhlongo finished fifth in 22.86sec, having broken the world record in the T44 class in 22.81 in the morning heats.

In the field events, on a night where the rain pelted down, young Simone Kruger finished fifth in her debut Paralympics with a throw of 31.51m in the women’s discus (F38) final. It came with her fourth of six efforts. And shot-putter Tyrone Pillay had to settle for eighth in the men’s F63 final with a best throw of 11.94m.

Pillay injured his back in the warm-up, with his prosthetic not being able to hold in the wet and jarring his back, all but ruining his competition. He had come into the event in great shape but the difficult conditions – slipping in the wet and being the only athlete with a prosthetic in the field – put paid to his chances.

Weyers stopped the clock in a season’s best 25.51sec, which was also quicker than the time she recorded in winning the bronze medal at the London 2012 Paralympics. A week ago in Tokyo, the 28-year-old had written herself into the history books when winning Team SA’s first medal, a gold at that, at these 2020 Games.

In the morning session, Mhlongo proved that he just keeps getting faster and faster. And when he crossed the line at the Tokyo Olympic Stadium, he looked at the big screen and there it was. ‘22.81 WR’. Yes, he had bettered his own world record in the men’s 200m (T44) class that he’d set in Stellenbosch in March 2019.

Mhlongo finished second in his heat, which qualified him sixth for the final and it’s unfortunate for the South African that he finds himself in a mixed class, where he was the only T44 category sprinter in an event which attracted nine T64 athletes. However, further good news is that at Paris 2024 there will be a T44 class for the 200m, and that’s where Mhlongo’s crowning glory will come.

For now the 27-year-old can enjoy the moment of a career-best performance on the biggest stage of all. It was the first time he has ever gone under 23 seconds and he carved 0.32sec off his previous world record. In difficult conditions in the evening he went close to that new world record, getting to within five-hundredths of a second of that time.

“I went out there to enjoy every step and we just went for it,” he said after the morning’s record. “I was fortunate to have executed the race well,” said the man who developed patellar tendinitis [jumper’s knee] while in grade nine and took up para-athletics seven years ago. I wanted to appreciate being here … being alive and appreciating the competition.”

Weyers also had a good morning on the penultimate day of competition. The ever-bubbly South African cruised through her heat, winning it in a season’s best 25.62 which placed her fifth on the time sheets heading into Saturday night’s final.

“This was quite tough being here today in that two days ago I wanted to go home!” she said. “We were treated to an amazing South African home-cooked meal in the village and that was really special. In my heart I longed to go home but there’s still unfinished business. “I’m here, I’m in the moment and I’m super excited for the final. I just missed out on the 100m, but I’m excited to race this 200m. It will be one last time in the call room and I’ll soak up the moment and enjoy all the emotions.”

Someone who is unsure whether or not she has competed for the last time on the Paralympic stage is veteran Zanele Situ. The 50-year-old Paralympic great – she won javelin gold at the 2000 and 2004 Games – placed fifth in Saturday’s women’s F54 final with a fourth throw of 16.22m being her best.

To put it into perspective, her best throw in winning gold in 2000 and 2004 had been 14.78m, so it shows that she remains as competitive as ever.

But, she had her eyes on the podium, although overall she enjoyed the Tokyo experience.

“This was a good competition,” she said. “I was hoping to throw 17m, but even then I wouldn’t have made it [into the medals], but I really enjoyed it. Although I only had two legitimate throws, I was trying my best.”

Situ pointed to the disruptions caused by the Covid-19 lockdown as having an effect on her preparations for Tokyo. “Covid really has had an impact on everyone’s lives, but I’m not saying no to Paris 2024. I really enjoy what I’m doing and I enjoy having the support of South Africa. I’m still going to hang on, and I know that we all have to work through this Covid pandemic together.” 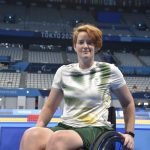 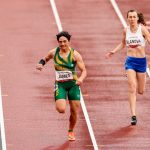 Thursday quiet before the Mahlangu storm

By GARY LEMKE in Tokyo On the third day of staying in the Paralympic village bubble “it” finally dawned on me. “It” wasn’t the sheer visual aspect of the 4 000-plus Paralympians with disabilities all in the same environment of towering 17-storey apartments and surrounded by a 4km perimeter fence. Admittedly, that is the initial and most common conclusion of… END_OF_DOCUMENT_TOKEN_TO_BE_REPLACED