Lloyd Harris’ run at the US Open came to an end in the second round when he was beaten by No 7 seed David Goffin of Belgium in the men’s singles.

Goffin recovered from 3-5 down in the first set tie-break, prior to five straight service breaks at the start of the second set. The Belgian won 16 out of 22 points from 1-1 in the third set to seize the momentum and broke in the ninth game of the fourth set.

The world No 10 hit 29 winners including 12 aces. Goffin is now one victory away from reaching the US Open fourth round for a fourth successive year.

What a spirited performance from @lloydharris63 🙌!

Harris gives world no.10 Goffin a scare before going down in the @usopen second round.

We are proud of you Lloyd! #usopen pic.twitter.com/GwtCYNNAYE 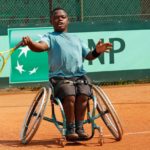