There were mixed fortunes for South Africa’s two singles representatives at the Australian Open in Melbourne on Tuesday. Lloyd Harris won his match, while Kevin Anderson bowed out at the first hurdle.

Harris reached the second round in the first Grand Slam tennis tournament of 2021. He beat Denmark’s Mikael Torpegaard 4-6, 6-3, 6-2, 6-2 in Melbourne in 2hrs 25min to set up a meeting with Australian wildcard Alexei Popyrin. The latter sprang an upset with a five-set defeat of the 13th seeded Belgium, David Goffin.

However, for Anderson, it was an early exit. He was beaten in straight sets by the No9 seed Matteo Berrettini in 2hr 36min. The Italian won 7-6 (11-9), 7-5, 6-3. Anderson won the battle of the aces 18-14, but failed to convert any of the three break points he held, while Berrettini broke the South African’s service twice and that’s all that was required for him to have the advantage.

Harris hit 21 aces compared to six of his 188th-ranked opponent who entered the main draw as a ‘lucky loser’ in qualifying The 23-year-old South Africa hit 41 winners, and Torpegard managed only 21. Harris also lost his serve only once and broke through five times when he returned.

Lloyd Harris fought back from a set down to win his 1st round singles match at the #AustralianOpen, earlier this morning (SA time). Harris came back to beat the unseeded Danish player, Mikael Torpegaard, 4-6, 6-3, 6-2, 6-2. pic.twitter.com/9jRWz4G8MJ

There was added drama in the Harris match when a ball kid collapsed at the side of Court 16 at Melbourne Park. The ball kid was sent home to take complete rest. Once the girl collapsed, nearby staff and players rushed to help him before assisting from the court to receive medical attention.

This is the first time that Harris has reached the second round at the Australian Open. Last year he was no match for Argentina’s Diego Schwartzman, the tournament’s 14th seed, who won in straight sets. 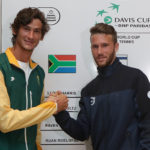 Harris first up at home for SA against Israel

Tokyo looms, again, We don’t know for sure in what shape of form the Olympics and Paralympics will take place in July to September and if anything 2020 taught us to take nothing for granted. What we do know is that if Tokyo 2020 +1 does go ahead, it will do so against a new-found back drop where simply taking… END_OF_DOCUMENT_TOKEN_TO_BE_REPLACED