Ireland’s Sam Bennett won stage 10 of the Tour de France as Primoz Roglic retained the leader’s yellow jersey. Bennett edged out Australia’s Caleb Ewan in a sprint finish to give the Deceuninck-Quick-Step rider his first stage win on the Tour.

Bennett’s victory had him become the sixth Irishman to win a stage at the Tour de France and ensured he now has stage wins at all three of cycling’s Grand Tours.

South Africa’s Daryl Impey and Ryan Gibbons produced their best results of the Tour when they crossed the line in 22nd and 23rd positions, respectively, and handed the same time as Bennett after 3hr 35min 22sec of riding.

In Wednesday’s 11th stage the race travels the relatively flat 167.5km route from Chatelaillon-Plage to Poitiers.

Hunter fourth after stage one 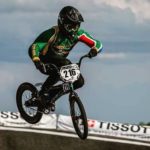 Olympian Dodd on his worlds and SA get world numbers

Tokyo looms, again, We don’t know for sure in what shape of form the Olympics and Paralympics will take place in July to September and if anything 2020 taught us to take nothing for granted. What we do know is that if Tokyo 2020 +1 does go ahead, it will do so against a new-found back drop where simply taking… END_OF_DOCUMENT_TOKEN_TO_BE_REPLACED