South Africa’s Proteas produced the best performance of their Vitality Netball Nations Cup campaign so far when they pushed world champions New Zealand all the way in London.

Ultimately, the Proteas came up short, going down 48-41, but giving the Silver Ferns their toughest match of the tournament, which heads into its final day on Sunday with New Zealand playing Jamaica for the title and South Africa meeting England in the playoff for third and fourth.

After posting comfortable 16 and 26-goal wins over England and Jamaica respectively, the Silver Ferns were forced to dig deep against the winless South Africans before going on to complete a clean sheet through the round robin matches.

Greater poise and accuracy got the world champions safely home after the Proteas delivered their best match of the tournament to test and push the New Zealanders’ resolve throughout.

‘It was really torrid and very physical out there and defensively, I thought South Africa were sublime and really took it to us,’ Silver Ferns coach Dame Noeline Taurua said afterwards. ‘I’m glad that we were able to grind it out. We had some inexperienced players out there which is going to be really valuable for us moving forward.’

The Silver Ferns changed their starting line-up for the first time in the tournament with livewire centre Kimiora Poi getting her first start in the black dress. There was also a first start at wing defence for Shannon Saunders as the Silver Ferns shared the defensive load in the wake of losing Michaela Sokolich-Beatson to injury on the eve of the tournament.

The Silver Ferns pegged back a strong start by South Africa to gain a slight advantage through an entertaining first quarter, the growing rapport between the new shooting combination of captain Ameliaranne Ekenasio and Maia Wilson continuing to flourish.

Failing to make headway on attack at times, the Proteas surged back strongly to keep the scoring in check as the Silver Ferns took a narrow 14-11 lead into the last break.

Karin Burger took over from Phoenix Karaka at goal defence on the resumption against her country of birth, working effectively in tandem with the athletic Jane Watson as the Silver Ferns started impressively with a four-goal unanswered streak.

The next three went to South Africa as both teams had patches of enterprising play. The in-circle defensive pairing of Zanele Vimbela and Karla Pretorius proved effective spoilers against the New Zealand shooters but the Proteas could not make the most of their opportunities.

In comparison, the Silver Ferns were more effective in converting their turnovers to build on their buffer when taking a 27-20 lead into the main break.

Whitney Souness, who produced a lively performance, replaced Gina Crampton at wing attack for the second half while Te Paea Selby-Rickit was introduced five minutes later for Wilson under the hoop as the Silver Ferns came up against a resurgent South Africa.

With shooters Ine-Mari Venter and former Southern Steel and Waikato Bay of Plenty Magic player Lenize Potgieter finding their range under the hoop, the Proteas chipped away to great effect.

Sinking their goals and continuing to disrupt the Silver Ferns flow, South Africa showed their credentials when levelling up the scores late in the piece.

The women in black responded in kind, a late rally helping to keep their noses in front despite being restricted to just 10 goals for the stanza when leading 37-34 at the last break and the prospect of a challenging run to the line. 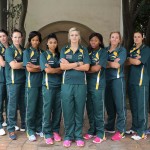 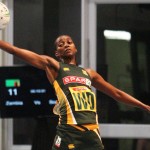 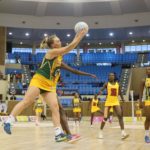