Prudence Sekgodiso may only be 18, but it does not mean she can’t dream big. She has set her sights on trying to qualify for the Tokyo Olympics once the coronavirus pandemic is under control.

It is a massive challenge. The TuksSport High School grade-12 learner will have to improve on her personal best time by more than two seconds. The Olympic qualification standard is 1:59.50 while Sekgodiso’s best time is 2:02.16.

The Tuks athlete would have it no other way. The same way a moth seemingly can’t resist circling a burning candle she can’t keep from pushing the boundaries. The adrenaline rush she gets every time she does run the near-perfect race is what fuels her passion.

Since 2016 she has improved her 800m time by more than eight seconds. Last Friday, when she won the junior women’s 800m race during the Gauteng North Championships, she was already more than a second faster than she was last year. Her winning time was 2:02.16.

‘I know I am capable of being faster if I can be tactically a bit savvier.’

An interesting comparison is that last year as a 17-year-old, Sekgodiso was faster than what Caster Semenya was at the same age. The Tuks athlete ran 2:03.98 while Semenya’s best time as a 17-year-old was 2:04.23.

Last year as a 17-year-old Sekgodiso possibly also became the youngest athlete to win the 800m at a South African Senior Championships. Semenya was 18 when she did so for the first time.

Apart from speedy performances on the track, Sekgodiso and Semenya share a passion for football. Both used to enjoy the challenge of trying to dribble the ball past their opponents.

Sekgodiso would possibly have continued playing if it was not for her brother who convinced her to broaden her horizons.

‘He made me watch Caster race on television. Once I did so, I was inspired. I wanted to be like Caster as she is a class act on the track.’

What for many might be seen as a burden turned out to be a ‘blessing’ for the aspiring middle-distance champion. As a youngster at the Medingen Primary School in Limpopo, Sekgodiso had to walk-jog about 10km to get to the school every morning and then another 10km to get back home.

When one speaks to the coaches at Tuks who have helped her, it becomes clear why it won’t be a surprise if Sekgodiso does become only the fifth South African female athlete to dip under two minutes in the 800m.

All agree that she is terrific as an athlete and a person. Apparently, she brings such a positive vibe to the track that even they as coaches can’t help but be motivated. She has got that hunger to be the best.

It is also said that nothing seems to faze her. Sekgodiso is never one to wonder what could have been. When the Tuks athlete has a bad race, she immediately puts it behind her. All that matters is the next time when she has to race better. 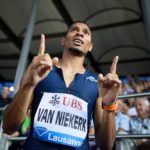 Flying Van Niekerk on top of the world again!

By GARY LEMKE in Tokyo On the third day of staying in the Paralympic village bubble “it” finally dawned on me. “It” wasn’t the sheer visual aspect of the 4 000-plus Paralympians with disabilities all in the same environment of towering 17-storey apartments and surrounded by a 4km perimeter fence. Admittedly, that is the initial and most common conclusion of… END_OF_DOCUMENT_TOKEN_TO_BE_REPLACED