South Africa is again saying goodbye to another sports personality with news of the passing of veteran canoeing administrator Artwell Mhlope.

He served the sport for decades from his base at Nagle Dam where he was the Umgeni Water water bailiff for many years, and was instrumental in setting up and running the Lembethe Canoe Club that has produced many successful elite paddlers.

Popular for his quiet humility, but always ready to take a formal stand when it was needed, Mhlope was a member of the Canoeing South Africa Board, and served as manager for South African teams to continental and international events, including the Beijing Olympic Games.

Former Dusi champion Thulani Mbanjwa was a neighbour of Mhlope’s and the first star to emerge from the Lembethe Canoe Club, triggering a massive interest in paddling amongst youngsters in the uMsindusi valley. “He was such a humble, friendly guy. To us young paddlers he was like a father, a brother and a parent,” said Mbanjwa in a Canoeing SA press release, “After Robert Lembethe passed away he looked after us. He was our leader and helped us in so many way. We learned so many lessons in life from him.

“We have lost a really good brother,” he added.

“This is a devastating blow for canoeing as a whole and for the community in that area,” said Canoeing South Africa president Kim Pople. “Artwell was valued as a member of the CSA Board for his wisdom and his deep connections to the sport. He single-handedly ran the club at Nagle Dam and countless generations of young men and women have benefitted from his energy and enthusiasm.

“He never sought any personal gain or glory from the sport, and in fact Artwell was happy lending a hand in the background rather than rubbing shoulders with the administrators in their suits,” she added.

“The sport will never fully grasp how big a role he played in creating the opportunities that generations of development paddlers have enjoyed over the past few decades,” said Pople.

Sprint star Bridgitte Hartley was part of South African team to the Beijing Olympics, and said Mhlope’s infectious enthusiasm rubbed off on all the sprint and slalom paddlers in China for that event. “He was always ready to help, no matter what, and he did everything with a big smile on his face,” said Hartley.

“Whenever I went to Nagle dam to train, he would drive past and hoot and wave enthusiastically, which I really appreciated,” recalls Hartley. She was training at Nagle Dam on Saturday and was told of Mhlope’s death by club coach Lucas Mthalane.

“We are all distraught,” said Hartley. “Nagle Dam will never be the same again.” 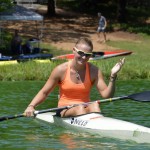 Van Tonder into B-Final in Duisberg, Hartley has C-Final berth

Juniors ready to rock in Russia

Tokyo looms, again, We don’t know for sure in what shape of form the Olympics and Paralympics will take place in July to September and if anything 2020 taught us to take nothing for granted. What we do know is that if Tokyo 2020 +1 does go ahead, it will do so against a new-found back drop where simply taking… END_OF_DOCUMENT_TOKEN_TO_BE_REPLACED