Olympic 400m champion Wayde van Niekerk laid down a marker when he raced to an impressive victory in the 200m at the ASA Athletix Invitational powered by AVANTI at the Ruimsig Athletics Stadium in Johannesburg.

Benefiting from a +2.1m/sec tailwind, Van Niekerk found an extra gear to hold off 100m star Akani Simbini, who had run a sub-10 in the 100m at the Gauteng North Championships at the weekend. Van Niekerk, whose return from a career-threatening knee injury suffered in 2017 has been widely documented, crossed the line in 20.10, with Simbine credited with a 20.29 in wet, windy conditions.

‘This definitely gave me confidence I didn’t have before,’ said Van Niekerk. ‘It’s one thing training well, but it’s a different thing executing it against such a quality line-up, guys I have the world of respect for.’

Simbine was far from downbeat after having to settle for second against his fellow Team SA star. Both will head to the Tokyo Olympics with realistic expectations of winning a medal for their country.

‘I just ran a terrible bend, but other than that I’m happy with the race,’ said Simbine.

In the field, Werner Visser dominated the men’s discus throw with a distance of 60.88m and former under-20 World Championships medallist Johann Grobler won the men’s javelin with 78.84m.

‘“It was another wonderful competition day for our track and field athletes despite the downpour of rain at the tail of the programme,’ said Aleck Skhosana, ASA;’s president. ‘We are particularly happiest that we were able to offer several athletes in both South Africa and from our neighbouring countries a chance to either seek qualifications or improve and test their level of performance.

‘This was a great return to athletics for ASA despite the challenges that the coronavirus has caused throughout the country and the world. We are encouraged to have witnessed that some of the athletes are at an advanced level of preparation. We are extremely happy with the success of this event, our first since a lockdown was declared by the national government a year ago.’ 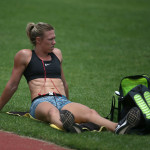 Horn and Bruintjies blitz to best times in Germany

By GARY LEMKE in Tokyo On the third day of staying in the Paralympic village bubble “it” finally dawned on me. “It” wasn’t the sheer visual aspect of the 4 000-plus Paralympians with disabilities all in the same environment of towering 17-storey apartments and surrounded by a 4km perimeter fence. Admittedly, that is the initial and most common conclusion of… END_OF_DOCUMENT_TOKEN_TO_BE_REPLACED