Austin Smith and Marsha Cox (Marescia) have been named by the South African Hockey Association’s as our Senior Players of the Year for 2012.

Western Province’s Smith, led the national side to gold at the Olympic Qualifier Tournament in Japan last year and led the side with distinction at the London Olympics the same year.

Cox, who plays for Southern Gauteng, also captained the women’s side to gold at the Olympic Qualifier Tournament in India in February last year, and led the side to 10th place at the Olympics.

Other Player of the Year awards made were: 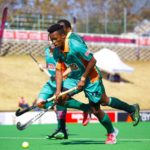 Semi-final showdown time in the PHL

Tokyo looms, again, We don’t know for sure in what shape of form the Olympics and Paralympics will take place in July to September and if anything 2020 taught us to take nothing for granted. What we do know is that if Tokyo 2020 +1 does go ahead, it will do so against a new-found back drop where simply taking… END_OF_DOCUMENT_TOKEN_TO_BE_REPLACED