Commonwealth Games artistic gymnast Ashleigh Heldsinger will soon be lost to the South African sports scene, writes Mark Etheridge. That’s because she’s emigrating to Australia in the next week or so.

Heldsinger, 18, competes out of the Johannesburg Gymnastics Centre where she’s mentored by long-time coach Ilse Roets.

Having competed for 13 years young Heldsinger will take a wealth of experience with her Down Under.

“I’m moving to Melbourne as my father got a wonderful new job pastoring a church there, so we’ve been waiting for this to happy for a while,” Heldsinger confirmed to Road to Rio 2016.

At the 2010 Commonwealth Games in Delhi, India, Heldsinger finished fourth in the Floor events and was a top 10 finisher in the Overall competition.

Will she continue with her gymnastics in Australia? “As far as my gymnastics is concerned I’m not quite sure yet, but I don’t think I’ll be continuing gymnastics thereÔÇª my decision’s not final yet, I’m just thinking about it.”

She described her Commonwealth experience as one of her career highlights and missing out on last year’s Olympic Games as the other end of the sporting spectrum. “Missing the Olympics because of ‘politics’ was a low blow but I worked through it so I guess it’s OK.”

She matriculated last year but plans on improving that on the other side of the Indian Ocean. “I’m going to redo it over there so I can do the subjects that I want.

“There are quite a few things I want to do when I get to Australia, dancing being one of them because I used to love doing floor and expressing myself, so that’s definitely the direction I want to go.”

One of the things that saddens her will be leaving coach Roets behind. “She’s very happy for my family and I’m sad to leave her because she’s like my other mother.”

Roets for one, reckons Heldsinger’s loss is a major one. “When she wasn’t sent to the Olympics she decided to quit and instead focused on completing her matric and helping out with the coaching at JGC.

“As talented and hard worker she was as a gymnast, Ashleigh displays the same potential as a coach and a judge. South Africa is losing a gem and I, for one, am very sad to see her go!

“Ashleigh offered up the last 11 years of her life to achieve the one goal most top class gymnasts strive for, which is the Olympic Games. At the World Championships in 2011 in Tokyo she out-classed several of the gymnasts who eventually ended up competing at the London Olympics and for JGC, she will forever remain an Olympic qualifier.

“Although she got injured at the Olympic Test event in January 2012 and was consequently awarded the FIG continental birth to the Olympics, together with another African gymnast from Egypt, Ashleigh’s Olympic dreams were shattered.

“But I can proudly say that she has refocused and has put the huge disappointment behind her. JGC wishes her all the best in Australia and would like to thank her for the inspiration she has been and the wonderful example she set in the gym. So many young girls looked up to her and still do and want to achieve the many great things she did.

“She participated in two World championships, one Commonwealth Games (where she was South Africa’s top all-arounder in 10th place and placed sixth on floor), as well as a winner of several African Championships gold, silver and bronze medals. 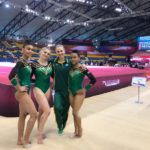