Much decorated international gymnast Kirsten Beckett is attempting the biggest vault of her career!
The former African Championships title holder and African Games champion has completed her final routine in the world of supple superstars and switched track to a new code.
That code is athletics where she’ll be aiming to see how far she can progress over the sprint distances of 100, 200 and 400 metres.
Johannesburg’s Beckett, who, let’s remember, only left her teenage years behind her earlier this year, has been doing gymnastics for three-quarters of her young life.
But in the gruelling code of torque-twisting torso-bending takes a high toll on even the very best.
She told Road to Rio 2016: ‘It took me quite a while to come to my decision as you know gymnastics has been my first love all my life. Although I’ve fully recovered from the operation to my shoulder I am severely hampered in terms of upgrading my skills. Upgrades are an absolute must if I’m to continue making an impact on the world stage.
‘I really have massive ambition in exploring my other talents and in my heart I believe that the time is right to start my journey. Who knows what the future brings, I might just decide to specialise in two apps in future, but only time will tell.’
She went on to cast her mind back to highlights of her gymnastics career.
‘It’s really difficult to single out any major achievement. However if I were to rank them I would say that my silver medal on vault at the Youth Commonwealth Games at Isle of Man in 2011 was truly memorable. The reason for this is that I gave it my all despite suffering from a hamstring injury.
‘Next I would rank my African Championship title in 2014 as a huge achievement and this was really because it was on home soil and also at my first attempt at the African championship at a senior level.
‘More recently my African Games title last year was just as memorable as I achieved this after the operation on my shoulder.
‘And then the silver medal I picked up on vault in Slovenia was equally special as the international field I competed against was very strong.’
And with that she swapped focus from gym to track. ‘For now, my focus is on starting my preparation to qualify for the 2018 Commonwealth Games in my new sport.
‘I’m currently working on the track. I’m going to attempt the 100, 200 and 400 and depending on my ability I will look at specialising in one of these events.
‘My coach’s name is Blake Dismore and I’m currently training at Ruimsig athletics track in Roodepoort, but I’m not part of a club yet.’
And just how fast is she right now. ‘Well I haven’t run competively since high school so right now I’m not exactly sure what my times are.’
Time will tell whether she can stay in sports fast lane.. but you wouldn’t want to bet against her right now! 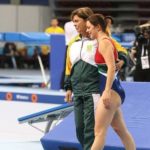 Beckett and Cummins have Rio in their sights

Tokyo looms, again, We don’t know for sure in what shape of form the Olympics and Paralympics will take place in July to September and if anything 2020 taught us to take nothing for granted. What we do know is that if Tokyo 2020 +1 does go ahead, it will do so against a new-found back drop where simply taking… END_OF_DOCUMENT_TOKEN_TO_BE_REPLACED