What better way to get Dimension Data’s second Tour de France up and running than a win in the opening stage of the 2016 edition!
Britain’s Mark Cavendish won the bunch sprint in the first stage of the three-week epic, 188 kilometres between Nont-Saint-Michel and Utah Beach.
It’s not only the African team’s first ever yellow jersey in the Tour de France but also the first time that Cavenish has had the honour of wearing the coveted material.
In their debut tour last year, Dimension Data occupied the polka-dot King of the Mountains jersey as well as claiming a stage win by Chris Cummings.
An incredible continuation of success for Africa’s premier cycling outfit, with the team’s only South African rider, Reinardt Janse van Rensburg, playing a key part in the victory.
The opening stage suited the sprinters perfectly with the five-rider breakaway having a minimal chance of making it to the finish first.
Etixx-Quickstep and Lotto-Soudal did the lion’s share of the pace making from the peloton while Team Dimension Data rode near the front, out of trouble, during a nervy stage which saw a number of crashes and splits in the peloton caused by crosswinds.
With 5km to go, the Afrian side’s plan starting taking shape. Moving up the left side of the peloton, Bernhard Eisel led Janse van Rensburg, Edvald Boasson Hagen, Mark Renshaw and Cavendish to the head of the bunch.
Dimension Data were shoulder to shoulder with the Belgian Etixx squad, with stage favourite, Marcel Kittel, at the rear of their train.
After two powerful turns by Janse van Rensburg and Boasson Hagen respectively, Dimension Data edged ahead as Renshaw led under the one-kilometre-to-go sign.
Cavendish waited on the wheel of Kittel who had to start sprinting early, before the Manxman burst out of the German’s slipstream with 200m to go, to take a historical victory.
’It’s a very special win, the first time I have had the honour of wearing the yellow jersey and what a special moment to do it, with such special people. ‘Three of my last guys, Edvald, Mark and Bernie were guys that have been with me my whole career and to have Reinardt pulling full on for me in the final, it was super emotional for me.
‘In this team, we race for more than just our sponsors, we race to raise the profile of the Qhubeka charity and to put 5000 kids on bicycles. There is no better way to do that than to wear the most iconic symbol in cycling and that’s the yellow jersey. I am very, very happy.’
Just as happy was Team Principal, Douglas Ryder, a man who has done so much for African cycling: ‘
A Tour de France win, our first stage this year, our first yellow jersey, our first year in the World Tour with a new sponsor, this is just unbelievable for this team.
‘The team has an X-factor because it’s got everything going for it at the moment. It has a social cause that everybody really cares about and that the riders believe in.
‘For all the riders to work like they did today, to commit to one objective and one goal and then to pull it off, it is sensational. To wear our first yellow jersey in our second Tour de France and win the first stage, after an incredible start to the season where we had a hugely successful Dauphine, this is an amazing moment for this team.
‘It’s amazing for our new partners and for that group who came, Bernie, Renshaw and Cavendish, it is incredible how they have integrated with our African riders to make this a special moment for this team and for African cycling.’
As for Janse van Rensburg after cycling he can always look at a career in fortune-telling! Check out his blog for Bicycling SA magazine ahead of the tour:
‘The finish of stage 1 should be a sprint, but with the wind blowing it´s a question of how big the group is in the final kms and which GC contenders have been caught out… Mark Cavendish is super keen to grab his first Yellow Jersey on stage 1’.
Sunday’s second stage is a 182km ride between Saint-Lô and Cherbourg-Octeville, a testing stage with a rather nasty Category 3 climb in the final stages lying in wait.’ 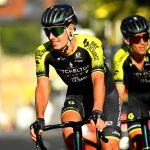 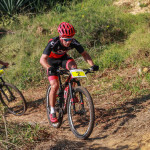 Cup leader Reid looks to shine on the European circuit

Tokyo looms, again, We don’t know for sure in what shape of form the Olympics and Paralympics will take place in July to September and if anything 2020 taught us to take nothing for granted. What we do know is that if Tokyo 2020 +1 does go ahead, it will do so against a new-found back drop where simply taking… END_OF_DOCUMENT_TOKEN_TO_BE_REPLACED