It was another day of spectacular performances from South Africa’s rising talent in Newcastle, Pretoria and Oudtshoorn as the SA Level 1 Age Group Swimming Championships concluded on Sunday.

Winning a total of eight medals in the competition was Western Province’s Calvin Nigrini (12), who added a gold in the 100m butterfly and a bronze in the 50m breaststroke at the NA Smit Swimming Pool.

Rounding off their tally to six gold medals were Trisha Pollicutte (10) in the 200m backstroke and 100m butterfly as well as Louche Wiehahn (11) in the 50m breaststroke and 50m freestyle.

Finishing the event with three gold medals were Adrian Viljoen (10) and Renette Coetzee (15) in the 200m backstroke, Estiaan Terblanche (13) and Charnelle Drake (16) in the 50m breaststroke, Caitlin Engelbrecht (13) in the 100m butterfly and Amre McCallum (14), Mattieu Bettings (13) and Jess Wright (15) in the 50m freestyle.

On the girls side, Carissa van Rooyen (10) and Cherne Midgley (14) did not disappoint, both bringing home a total of five gold medals. Van Rooyen added the 50m freestyle, while Midgley took the 200m backstroke and 100m butterfly.

At the third venue, the Newcastle Swimming Pool, Ruan Labuschagne (16) and Thalita Conradie (13) shared a tally of five gold medals. Labuschagne won the 100m butterfly, while Conradie added the 50m freestyle and 100m butterfly on the final evening.

Winning the fantastic four were Joane Meintjies (9) and Bernard du Raan (11) in the 50m freestyle, Connor Buck (10) in the 100m butterfly as well as Sachin Chetty (13) and Elzanie Rademeyer (13) in the 50m breaststroke.

Swimming South African will now be looking forward to hosting the SA National Aquatic Championships which will be held from 15-20 April 2013 in Port Elizabeth. 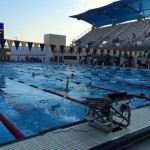 No medal but personal best for SA’s Roach in Texas

By GARY LEMKE in Tokyo On the third day of staying in the Paralympic village bubble “it” finally dawned on me. “It” wasn’t the sheer visual aspect of the 4 000-plus Paralympians with disabilities all in the same environment of towering 17-storey apartments and surrounded by a 4km perimeter fence. Admittedly, that is the initial and most common conclusion of… END_OF_DOCUMENT_TOKEN_TO_BE_REPLACED