A pair of runners-up spots for Antonio Alkana and Gena Lofstrand was the best return for the bunch of South Africans in action at Tuesday night’s Spitzen Leichathletik meeting in Luzern, Switzerland.

Alkana continued to impress in the 110-metre hurdles as he ran another solid race for second behind American Devon Allen.

Allen won in 13.31sec, and although Alkana is still battling to get that close to the 13.11sec national record earlier this year, his 13.34 is another consistent return.

‘I haven’t had a chance to watch the race yet, but I think I ran a good race in the conditions we had,’ said Alkana. ‘The first few hurdles weren’t fast and I had to work to get into the rhythm.

‘Once I got it, I started running faster. The track felt heavy because it was wet, but I’m satisfied with my performance.’

The other second place went to the ever-improving middle-distance racer Lofstrand.

Already boasting a national 800m championships title from four years ago, the Durban athlete has shown steady form during her European trip.

It’s only a matter of when, not if, she breaks that psychological barrier of two minutes for the two-lapper.

Other SA men in action were sprinters Henricho Bruintjies and Anaso Jobodwana, and neither would be satisfied with their performance.

‘And so my season comes to an end. So it’s time to get back to South Africa and start a new chapter. Thanks everyone for the support,’ said Bruintjes on social media after his night’s work.

The men’s 800 had another Rio Olympian lining for SA in the shape of Rynardt van Rensburg.

The speedster from Bloemfontein had made no bones about the fact that he was targeting Luzern as the big race of his current European campaign. But he would have been bitterly disappointed in the final outcome.

Van Rensburg was quick to re-assess and focus forward. ‘It was raining quite a bit during our race and the pacemaker went out in 52.4sec.

‘I probably went 53, so it don’t turn out to be the fast race I was wishing for. But I lost the race myself after 600m, mentally-speaking, when I realised it wouldn’t be a fast time.

‘I haven’t been great with tactical races this year, so it’s a big disappointment, but I’ll have to get back and get myself mentally prepared for my next race in Liege, Belgium a week from now, because physically I’m in the best shape I’ve ever been.’

American Quincy Downing won the men’s race in 48.85sec with Van Zyl fifth in 49.71, and still frustrated at not being able to replicate his training form. ‘It was tough. I had nice rhythm, but just struggled the last 30m. Now I’ve got two more races in Belgium and then it’s home time.’

In the same race Hamman was seventh in 50.25, while in the B race Constant Pretorius took fourth in 50.58.

South African women in action included Alyssa Conley in both sprint events. In the 100m B race she ran 11.69 for fourth spot behind Jamaica’s Remona Burchell (11.23). In the longer sprint she was again fifth, this time in the A event with a time of 23.55 behind the host country’s Lea Sprunger (22.97).

Just two South Africans were in field action. Olympic silver medallist Sunette Viljoen would not have been happy with her 59.34 for fifth spot as Germany’s Christin Hussong won with a 64.18m heave.

‘I spent the whole of Tuesday travelling, only got to Gothenburg at 5pm and then competed with about three hours sleep.

‘My body just didn’t have anything more to give and the poor weather didn’t help.

‘I’m going home now to re-focus on World Student Games in Taipei. I know I can do well there and all my focus will be on that. My true shape is good, I just couldn’t get the legal jumps to put it onto paper.

Next year in Europe I’ll plan completely differently because I take a while to get into the groove. I’ll come earlier to get in more meetings before the big ones.’

Grigora Trainingroup's Rikenette Steenkamp last night completed her European trip with another stirling performance in Göteberg, Sweden. It was her 4th victory in five outings. Powered by TuksAthletics.

She was the lone South African competing at the Folksam Grand Prix in Gothenburg, Sweden.

Her 13.14sec victory was good value into a 1.2m/sec headwind and she put one over Norway’s Isabelle Pedersen, who boasts a 12.75 best this season compared to Steenkamp’s 12.99.

‘I’m more than happy with the race,’ said the 24-year-old. ‘I worked on a few things like my start, which was much better today.

‘To be honest, it was a better race than the time reflects. Conditions were cold and windy. Although a person doesn’t want to admit it, it does play a part.

‘So technically I’m very happy with my run, today was more about the win and I ran against a very strong field.

‘That’s it  for my European season. I’m heading back to SA on Wednesday and will start training for world students in Taipei, Taiwan.’ 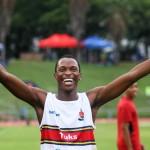 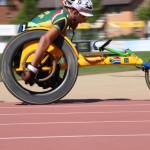 Du Preez on a roll with records galore in Europe

Tokyo looms, again, We don’t know for sure in what shape of form the Olympics and Paralympics will take place in July to September and if anything 2020 taught us to take nothing for granted. What we do know is that if Tokyo 2020 +1 does go ahead, it will do so against a new-found back drop where simply taking… END_OF_DOCUMENT_TOKEN_TO_BE_REPLACED