The South African Under-17 national soccer team has a mountain to climb if they are to reach the finals of the African Youth Championships in Morocco next year after losing 3-2 to Ghana in the first leg at Sinaba Stadium in Daveyton this weekend.

Ephraim ‘Shakes’ Mashaba’s charges will have to overcome the deficit when they visit Accra in two weeks time.

Ghana led 2-0 at the break with goals from Asare Paul de Vries and David Atanga.

The South Africans returned from the dressing room looking much better and had the visitors on the back-foot in the opening minutes of the second stanza .And it came as no surprise when Morne Nel reduced the deficit.

But Ghana recovered quickly and restored their two-goal lead with the second goal of the day from Asare, third for Ghana to make it 3-1.

With three minutes left on the clock, Amajimbos pulled one back through second half substitute Siyanda Ngcobo who came on for Bongani Khanyile.

Coach Mashaba also brought on Sabelo Malunga and Fagrie Lakay for Rivaldo Coetzee and Morne Nel respectively in a bid to reduce the deficit.

With the three goals conceded at home, South Africa has a tall order when the two sides meet again in Accra, Ghana in a fortnight.

The overall winner will qualify for the 10th edition of the African Under-17 Youth Championship scheduled for Morocco from 13-27 April 2013.

ÔÇ£I am obviously not happy with the result because I believe we gave away very soft goals in the first half which took the game away from us.

“In the second half, we played much better and were able to score two goals, even though we let in another one. Had we started the way we finished, we could be talking a different story now,ÔÇØ said Mashaba.ÔÇ¿┬áÔÇ¿ÔÇ£But it is not over yet, we still have the second leg to play and I am confident we can return with a very positive result. If they could score three in our backyard, I believe we can do the same in their home ground.ÔÇØ

Despite being happy with the result, Mashaba’s counterpart from Ghana, Samuel Kewsi Fabian, had some reservations.
ÔÇ£I must say I am not very happy with my boys. The idea was for us to score as many goals as possible and not concede. But the two goals that South Africa scored here could come back to haunt us.

ÔÇ£We also sustained two injuries that may make us alter our plans. We will check the two players at a later stage and see how they are doing.

“Be that as it may, I am positive we will put on a much-improved performance at home to win the match.

ÔÇ£On a very neutral but positive note, I believe Africa has a great future when you look at the two teams that played here. We must just do our best to ensure that we take good care of this talent.ÔÇØ

Ex Banyana skipper speaks of life after the captaincy 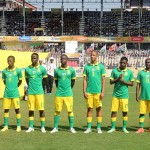 SA U17 side beaten by Brazil in BRICS final

By GARY LEMKE in Tokyo On the third day of staying in the Paralympic village bubble “it” finally dawned on me. “It” wasn’t the sheer visual aspect of the 4 000-plus Paralympians with disabilities all in the same environment of towering 17-storey apartments and surrounded by a 4km perimeter fence. Admittedly, that is the initial and most common conclusion of… END_OF_DOCUMENT_TOKEN_TO_BE_REPLACED